John Ackerman (Pseudonym; Angiras) was born in Philadelphia and studied at the John Hopkins 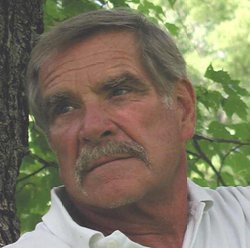 University, where he received a degree in physics. After 35 years concerned with satellites and lasers, he retired early to study the work of catastrophist Immanuel Velikovsky and is now a leading exponent of that school of thought.

Ackerman has developed with his own particular brand entitled ‘cyclical catastrophism’(b). This particular aspect is developed in his book, Egyptian Astrophysics[1461],  which explores the Egyptian texts relating to the cyclical close encounters of the Earth with Mars and Venus between 3700 and 687 BC, proposed by Velikovsky.

Velikovsky claimed a number close encounters with Mars in the 7th and 8th centuries BC. The idea was taken up by, among others, Donald Patten[277] (1929-2014) and more recently expanded upon by Stuart Harris(c).

He claims to have identified two celestial events that occurred some 11,640 and 10,340 years ago, which had a profound effect on the Earth and its in habitants. Students of the Atlantis question cannot fail to note that the older date coincides exactly with the date that was apparently given to Solon for the demise of Atlantis.

Excerpts from Ackerman’s books are available on his website(a) where he outlines a bizarre view of Atlantis that closely mirrors that of Alan Alford, marrying it with the more extreme ideas of Velikovsky, placing it on Mars during a close encounter with the earth, with “its location now buried under the northern icecap on Mars”.

Ackerman’s best known books are Firmament[1417] and Chaos[1418] which gave him the title of his website.