Francis Xavier Aloisio (1946- ) is a Maltese novelist, artist and a former priest, who engaged in missionary work in Peru. After leaving the Church, he worked in Britain for 22 years before returning home in 2000. 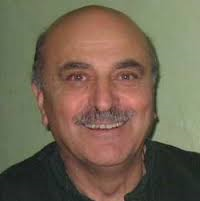 His interest in the prehistory gained expression in a unique series of paintings and postcards. He has recently published a novel, Islands of Dream[783], or as he calls it a ‘novelogue’ in which he uses the characters to explore aspects of Malta’s mysterious past.

Aloisio adopts a mystic view of the Maltese temples and quite frankly I find his ideas to be just another collection of New Age twaddle. For example;

The temples “have to be seen as energy centres. They are in reality ‘a miniaturised hologram of the cosmos.’  They were ‘heart centres’ of Light and Life. The Temples were built to interact with the vital atomic energy of the Central Sun, in order to draw Cosmic Ray Consciousness and Star-Light Energies on Earth. Because of their unique purpose the temples are a Reservoir of Consciousness, so we need to start to look at the structures in a very different way. They were ‘charge compressors’, ‘energy generators’ and ‘power houses.’  In a word, they were ‘energy centres’ for planet Earth.”  And “Malta lies on some major pathways of highly charged electromagnetic energy. The temples were built on energy or ley lines and they are very much alive and pulsing. Each temple has an energy point that vibrates stronger than in other areas. It’s up to us now to re-energise these power points, vortexes and energy centres. The vortex of each temple will get stronger each time we acknowledge and connect with these power points. It is similar to winding a clock, and every time we visit these sacred places we are nurtured and inspired by the energetic imprint left in our beings by the innate power of each place.“

More of this drivel can be read on his website(a) and the bad news is that this was just the first of a trilogy. Masochists can watch a YouTube clip(b) and listen to Aloisio promote his second book, The Age of Magic and Wisdom[947].

*Sadly, it seems that Aloisio’s wife, Christine, has now been infected and busy promoting a forthcoming book, The Crystal City of Atlantis, which she describes as being under Malta.*