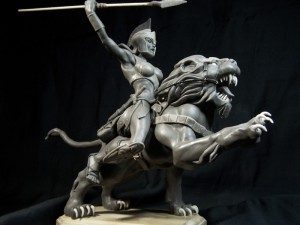 Attention has been drawn to the fact that the Berbers, also known as Amazigh in North-West Africa have a matriarchal culture. The possibility of an etymological connection between Amazon and Amazigh was suggested by Guy C. Rothery (1863-1940) in his 1910 book, The Amazons[1393]  , and recently endorsed by Emmet Sweeney in his Atlantis: The Evidence of Science[700]. In 1912 Florence Mary Bennett published Religious Cults Associated with the Amazons[1548], which has been republished in recent years.

Lewis Spence advanced the imaginative view[259.49]that the Amazons were not women at all, but men whose appearance was considered effeminate by some commentators. A more rational explanation on offer is that the males of some peoples had little facial hair or shaved (such as the Hittites) and were possibly described by their more hirsute enemies as ‘women’.

The Smithsonian magazine published a useful overview(e) of the history of the Amazon story in the April 2004 edition and in September 2011 revealed the story of the little-known female warriors of Benin (formerly Dahomey), numbered in their thousands, who were active during the 17th,18th and 19th centuries. The BBC published an article in August 2018 on their history and their modern day descendants(l) .