Aristotle (c.384-322 BC) was born at Stagira, a Grecian colony in Macedonia and died in Chalcis. He became Plato’s pupil at the age of seventeen and developed to become one of the trinity of the greatest Greek philosophers, along with Socrates and Plato. In turn, Aristotle was the tutor of Alexander the Great. However, Aristotle was something of a ‘know-all’, had his own blind spots. Katherine Folliot mentioned that Aristotle ‘held all non-Greeks in utter contempt’ clouding his judgement regarding any story originating in Egypt. John Michael Greer 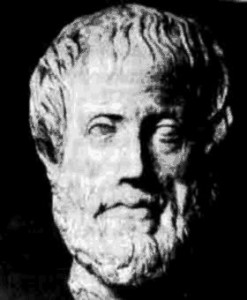 [335.16] points out that Aristotle consistently disagreed with his teacher, Plato. Aristotle’s geographical knowledge is highly suspect, claiming as he did that both the Danube and the Guadalquivir rose in the Pyrenees. However, it was Aristotle, revered by the Church, who maintained that the universe was earth-centred, a view that led to the persecution of Galileo and the burning of Giordano Bruno for their ‘heretical’ cosmological views.

According to Diogenes Laertius, Aristotle disagreed with his teacher on philosophical matters while Plato was still alive, causing Plato to remark, “Aristotle has kicked me, as foals do their mothers when they are born.” While there is evidence that Aristotle never lost his high personal regard for Plato, the fact remains, that in his later writings he never mentions Plato except to refute his doctrines, maintaining that the Platonic method is fatal to science.

Thorwald C. Franke refers specifically to Aristotle’s silence on the subject of Atlantis in his Aristotle and Atlantis[0706.30] in the following manner, “After all, if Aristotle were against the existence of Atlantis, one might have expected him to document his disagreement with Plato in some way and dispute the matter at hand. (Ingemar) Düring[1421] expresses what every person familiar with ancient literature knows well: ‘in accordance with the prevailing practice of that time, one mentioned the author of an opinion only if one did not agree … when it came to prevailing views with which he agreed, he [Aristotle] never mentioned the author.’

Thus the original argument is turned on its head: Aristotle’s very silence meant – if anything – more that he was for the existence of Atlantis than against it.”

My interest in Aristotle stems from the fact that he is constantly presented as the only classical writer to argue with the existence of Atlantis. A typical example are the comments of David Hatcher Childress who describes[620 .141]Aristotle as sceptical on many matters and that as well as doubting the reality of Atlantis he also appears to have questioned the veracity of Homer’s Trojan War when Strabo quotes Aristotle as saying that the Greek wall of Troy may never have been built but “invented and then demolished by the poet” (Geography XIII.i.36:).

However, Thorwald C. Franke‘s book, now published in English, persuasively  disputes this commonly held view that Aristotle did not accept the existence of Atlantis. He points out that the alleged critical comment did not come directly from the writings of Aristotle but from a quotation attributed to Aristotle by Strabo (Geog. II 102). Franke has traced the use of this text as a dismissal of the existence of Atlantis by Aristotle back to 1816, when the French astronomer and mathematician Jean Baptiste Joseph Delambre (1749-1822) misinterpreted the commentary on Strabo’s Geographica by Isaac Casaubon in 1587.

Franke has recently augmented his book with a YouTube video, in English(d) and German(e).

Franke points out that a study of more than twenty passages from Aristotle’s writings relating to Atlantis reveals that he was inclined to accept the Atlantis story as true since he accepted many of its details without expressing any doubt about the core of  it.

*Jean Baptiste d’Anville (1697-1782) was a highly regarded geographer and cartographer, and also an Atlantis sceptic. However, as Franke has pointed d’Anville accepted that Aristotle believed in the existence of Atlantis[880.83].*

In May 2016, there was held at the Aristotle University of Thessaloniki, in ancient Stagira and in ancient Mieza, an international conference ‘Aristotle 2400 Years’ at which it was claimed(a) that Aristotle’s long lost tomb had been discovered at Stagira, his birthplace. Understandably, this generated an immediate critical response(b).

Aristotle like others of his era are still highly regarded as philosophers, but unfortunately it took over a millennium before Ibn al-Haytham developed the concept of experimental data and reproducibility of its results. On the other hand, Aristotle, is not an ideal mentor regarding many subjects outside philosophy.

He was happy to justify slavery, as was Athenian society in general.

Aristotle was also a biologist whose work amazed Darwin when William Ogle sent him a copy of The Parts of Animals[1317] which he had translated. Now in The Lagoon[1318],  a modern biologist, Armand Marie Leroi, reveals more of Aristotle’s wide-ranging scientific investigations and his conclusions, not all of which were correct(c) .