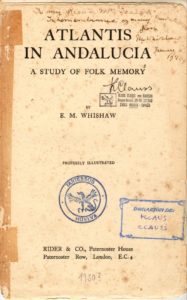 her 25-year search for Tartessos which she believed she had found under the city of modern Seville. In spite of the original title of her book her view was that Tartessos itself was not Atlantis but one of its colonies. The book describes in detail Mrs Whishaw’s excavations in the town of Niebla, where she lived and the evidence she found which indicate an early culture that she claimed was Atlantean and which was brought from Libya following the drying of the Sahara around 10000 BC. She also investigated the pre-Roman mining that was carried out in the region and concluded the copper extracted there was the ‘orichalcum’ of Plato’s narrative.