The Bahamas are a favoured location for Atlantis by some writers. They refer to the Spanish for Bahamas being Baha Mar or ‘Shallow Sea’ and link it with Plato’s reference to impassable or shallow sea encountered at the site of the sunken Atlantis. There is little doubt that large areas of what is now submerged land around the Bahamas were exposed during the last Ice Age, a situation 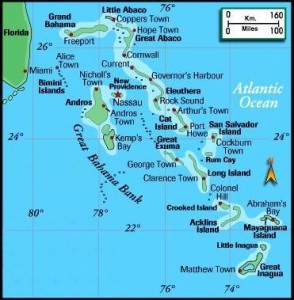 paralleled around the world.

After the arrival of the Spanish, the natives of the Bahamas, the Lucayans, were gradually wiped out by disease and exploitation. Consequently, we are unable to avail of the legends of these people, which might have thrown more light on the early history of the region.

Interest in the region was heightened by the discovery of what appeared to be a manmade underwater road off the coast of Bimini in 1967. This ‘Bimini Road’ has been subject of continuing controversy ever since.

Atlantis seekers have pointed to this discovery as evidence of Atlantis in the Bahamas. They add to this Plato’s reference to impassable or shallow seas existing where Atlantis sank. They further suggest that these shallows exist today in the Bahamas. However, it must be pointed out that Plato refers to the impassibility being caused by mud. There is no indication of this mud today otherwise the Bimini Road would not have been visible and the waters in the region, although shallow, are certainly not impassable.

In 2005, a 23-year-old Canadian mechanic named Chris Shearer achieved his 15 minutes of fame when he claimed(a) to have discovered the concentric rings and canal system of Atlantis in NASA images off the Bahamas. He assumed that these had been uncovered by the recent tropical storms in the region. He immediately sought funds for an expedition to the area. Nothing has been reported since.

More recently, another site in the Bahamas, Cat Island, has also been identified as a possible location with remnants of an ancient civilisation.