Walter Winston Baucum (1938-2012) was a retired American teacher with a passion for ancient history. He  is probably best known for his book The History and Future of Israelite America[184], which promotes the idea of America having been settled in pre-Columbian times by some of the 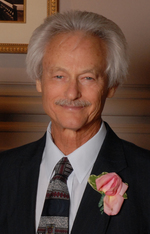 More recently he has ventured into the realms of Atlantology publishing his Bronze Age Atlantis[183] in which he follows some of the ideas of Jürgen Spanuth who placed Atlantis in the North Sea and identified the Sea Peoples who invaded Egypt as the ‘North Sea Peoples’. Baucum introduced a number of hard-to-accept ideas such as the Picts of Scotland and the Irish leprechauns (little people) were Minoan!

He concluded that Atlantis was basically “a seafaring, metal-gathering empire”, while with regard to the location of Atlantis, the capital city, he echoed Spanuth and opted for the vicinity of Heligoland, where sandbanks existed to the east as late as the 17th century (p.297).