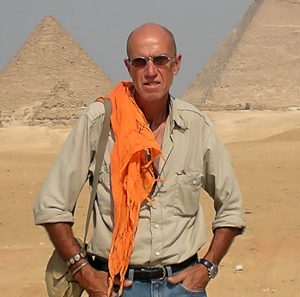 as the original promoter of the Orion Correlation Theory, which claims that the layout of three principal Giza pyramids mirrors ‘Orion’s Belt’ in that constellation. This received widespread coverage when it was outlined in The Orion Mystery [1707] written by Bauval and Adrian Gilbert and in Keeper of Genesis [1050] written with Graham Hancock, published two years later. In fact, Bauval had first published his theory in 1989 in Discussions in Egyptology(a).

Another writer, Wayne Herschel, is claimed to have reinterpreted Bauval’s Orion theory in his book The Hidden Records [1706]>and not only claims that the Giza pyramids reflect the layout of stars in Orion’s Belt, but that a similar arrangement of ‘pyramids’ in the Cydonia region of Mars is also to be found. Emilio Spedicato is another supporter of this Cydonia-Giza-Orion association(g)!<

Herschel’s volume is a glossy collection of balderdash, which includes such delights as the Martians having a penal colony on Earth, as well as promise of a sequel that will reveal “two further shocking secrets of the Sphinx.” Eventually, The Alpha Omega Taurus Star Gate was published with a new collection of balderdash.> The odd idea of Earth as an alien penal colony has also been put forward by Dr. Ellis Silver an American ecologist(f).<

During one interview Bauval declared that “To be very honest, I am not a believer in Atlantis.”(b) However, he has no difficulty in adopting the idea of ancient astronaut visitors a la von Däniken, as revealed in Cosmic Womb [1708], written with Chandra Wickramasinghe and reviewed by Jason Colavito(c) .

Zahi Hawass, the former Egyptian Minister of Antiquities has repeated clashed with Bauval, particularly in connection with the proposed Orion correlation. In April 2015, Hancock was due to engage in debate with Hawass on the subject of their conflicting views of ancient history. However, when Hawass saw that Hancock included an image of Robert Bauval in his presentation, he refused to continue with the arranged format(d)(e) and after a lot of shouting, from Hawass, he stormed out.