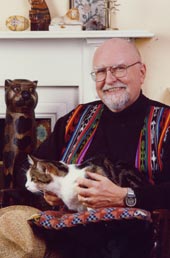 H.E. (Herbie) Brennan was born in 1940 and is a former journalist and at the age of 24, he was the youngest newspaper editor in his native Ireland where he still lives. Brennan is also an I Ching practitioner and a hypnotist.

He is a prolific author, having written over 100 books on a wide variety of subjects[027][028][029]. He has written one book specifically about Atlantis[030] as well as a book on lost civilisations for younger readers[031]. His website(a) has a full bibliography.

In his 2000 book, The Secret History of Ancient Egypt[822], he presents a spirited defence of the claim of ancient advanced technology and while his description of the Great Pyramid is worth a read, it would be better read alongside Robert Schoch’s Pyramid Quest[456] . He frequently refers to Atlantis, devoting the final chapter to the subject, but it adds nothing to the solution of the mystery. However, I was surprised at a number of small errors that should have been edited out; twice he converts 396 metres as 13,000ft (p60), he claims that the base of the Great Pyramid was levelled to a tolerance of 0.6cm(p74) when obviously he means the perimeter, he claims that an insulator holds an electrical charge(p82) when he mean a capacitor, he describes an electrode made of glass(p137) which is not possible as glass is an insulator.

Brennan in an earlier book, Occult Reich[027], touched on the subject of Lemuria with the following two gems, “Atlantis, in earliest times, was actually part of Lemuria” and “ the degenerate line of Lemuria is still with us,  lthough only just and obviously dying. It is represented by the primitive aborigine of Australia.” He also claims that a volcanic upheaval brought a tiny speck of Lemuria to the surface. “It rose complete with a host of giant statues……..now known as Easter Island.”