The Celtic Shelf in the North Atlantic is accepted as having had large areas, now under water, exposed during the last Ice Age when sea levels were far lower than today due to the enormous amounts of water contained in the glaciers that covered vast swathes of northern Europe and America.

A number of investigators have proposed that these exposed lands were 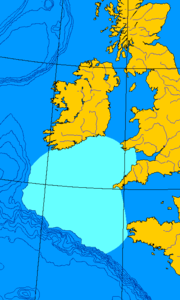 home to Atlantis. Stone Age artefacts have been discovered off the coasts of Britain in recent years demonstrating the man lived on a more extensive landmass at the end of the last Ice Age.

Seventy years ago F. Gidon proposed the Celtic Shelf as a location for Atlantis, but as he ascribed a Bronze Age date to the society, the Celtic Shelf would already have been inundated and since Atlantis had mountains, at least their peaks would have remained visible.

A leading advocate of a Celtic Shelf location for Atlantis is the Russian Viatcheslav Koudriavtsev, who for the past ten years has been promoting his view that a site near to the Scilly Isles was the location of Atlantis. Although he has received government permission to carry out explorations in the area it appears that lack of funding has thwarted his plans to attempt to verify his theory.

Dan Crisp has published(a) a discussion on various location theories and concluded that on balance Koudriavtsev was on the right track when he nominated the Celtic Shelf as the most likely location of Atlantis.

John Nichols has also written a long article identifying Atlantis with the Garden of Eden and placing it on the Celtic Shelf about a hundred miles off the coast of France, due west of Brest(b) .

In 2016, Philip Runggaldier added his support[1166] for locating Atlantis on the Celtic Shelf, explaining its demise at the end of the last Ice Age being the result of a megadeluge that burst through an ice dam containing a glacial lake in the Irish Sea Basin.