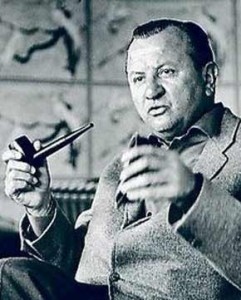 C.W. Ceram (1915-1972) was the pseudonym of the German journalist, Kurt Wilhelm Marek, who apparently wrote under that nom de plume in order to distance himself from his wartime work as a Nazi propagandist working as a member of the Propagandatruppe.

His interest in archaeology led to a number of books on the subject, the best know of which were Gods, Graves and Scholars[1095] and The Secret of the Hittites[1096].

A contemporary and highly critical review of the former is available online(a).

*Ceram, an Atlantis sceptic, ‘calculated’ that 20,000 books had been written on the subject. This is nonsensical, but might be half true if all  translations Atlantis specific books together with all published papers, directly related to the subject, are counted as well.*

Ceram is also responsible for coining the often quoted phrase: “Genius is the ability to reduce the complicated to the simple”