Enoch was the seventh patriarch in the book of Genesis. However there appears to be two Enochs in the Bible(d), one fathered by Cain, the other by Jared! He is also regarded as the inventor of astrology, while Eusebius 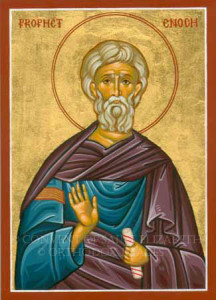 In Genesis 4:16-17 it is recorded that Cain was building a city and that he named it after his son Enoch. One commentator suggested that Enoch, the city, was the archetype for Atlantis the city(e).

*Thorwald C. Franke has listed(f) a number of reasons why the biblical city of Enoch cannot be identified as the city of Atlantis.*

It is quite clear that the interesting but mysterious Enoch has done little but generate wide-ranging speculation including a completely unsubstantiated link with Plato’s Atlantis(b). Eusebius the 4th century bishop of Caesarea wrote that Enoch was Atlas, king of Atlantis (Praep. Ev., ix, 17).