Professor Richard Freund is the latest academic to enter the Atlantis debate. 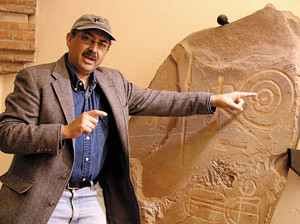 Freund is a rabbi and the director of the Greenberg Centre for Judaic Studies at the University of Hartford. He is the author of Digging Through the Bible in which he recounts his experiences excavating in the Middle East.

Freund ‘led’ (see below) an expedition of Spanish, American and Canadian scientists in 2009 and 2010 to investigate satellite the images of the Doñana Marshes, showing circular and rectangular features, discovered by Werner Wickboldt in 2003. National Geographic have included the findings of the expedition in a 2011 documentary entitled Finding Atlantis(a).

Another documentary, along with a transcript, which also ‘stars’ Freund, entitled “Atlantis – The Lost City” is available(e). Freund has also inveigled his way in to the 2017 National Geographic documentary, Atlantis Rising.

Frank Joseph, the former leader of the American Nazi Party, probably jealous of the media coverage that Rabbi Freund got, following the 2011 documentary, disputed Freund’s conclusions in an article in the Atlantis Rising magazine Number 88.

Freund believes that these structures discovered at Doñana are related to Atlantis/Tarshish. Freund has pointed out that the large amounts of methane emanating from the site suggests that only a tsunami could have suddenly trapped the large quantities of organic matter required to generate that quantity of methane!

However, a more sober view is presented by by Juan Villarias-Robles, a Spanish anthropologist working with the Spanish team investigating the Doñana site. He recounts(b) how Professor Freund spent less than a week on the site and was not the leader of the Hinojos Project.

*“Richard Freund was a newcomer to our project and appeared to be involved in his own very controversial issue concerning King Solomon’s search for ivory and gold in Tartessos, the well documented settlement in the Donaña area established in the first millennium BC.

He became involved in what we were doing and provided funding for probes through his connections with National Geographic and Associated Producers.

He left and the film company told us the documentary would be finished in April or May. But we did not hear from him and are very surprised it has appeared so soon and makes such fanciful claims.”(b)*

With regard to the features identified by Wickboldt, Villarias-Robles explains that so far anything found has been smaller than anticipated or dated to the Muslim period. He declares that no remains of Tartessos or Atlantis have been found. Equally moderate are the comments of archaeologist Philip Reeder from the University of South Florida, who is also unconvinced that Atlantis has been found(c).

Furthermore, the respected Greek historian Ephorus described Tartessos in his day (4th century BC) as still being a rich source of tin, copper and gold(d). Since he wrote this long after Solon’s visit to Egypt, and even longer since the sinking of Atlantis, it would appear to rule out identifying Atlantis with Tartessos.

Freund also believes that the Phoenicians were descendants of the Atlanteans. No doubt these contentious claims will be explored in greater detail in his book Digging Through History: From Atlantis to the Holocaust.