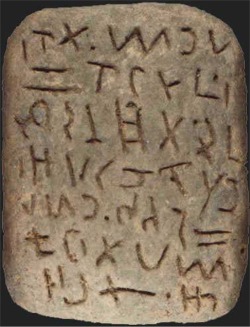 seventeen-year-old boy, Émile Fradin (1906-2010)(b), discovered a number of artefacts including inscribed tablets with writing similar to ancient Phoenician scripts. Some of the pottery depicted animals extinct in the area for over 10,000 years. A group of academics were assembled in 1927 to decide on the authenticity of the find. The experts decided that the whole collection were forgeries. It must be remembered that at the time the Piltdown controversy was at its height leaving any reputation conscious scientist very wary.

However, it does not appear to me that it is credible that 10,000 year old inscriptions exist that are similar to Phoenician scripts. The intervening 8,000 years would have altered the shape of the characters out of all recognition just as our modern Roman script is totally different to its antecedents in the Eastern Mediterranean just three thousand years ago. The thermoluminescence tests support this view but the Glozel writing still has value as examples of ancient scripts.

The excellent Migration and Diffusion website has a paper(c) written by the American Donald B. Buchanan, Secretary of The Epigraphic Society, which offers a preliminary decipherment of the Glozel script. Paulo Stekel has built on Buchanan’s work and offers a couple of  papers of his own(d)(e). A (French) site dedicated to Glozel translation attempts is also available(f).

Philip Coppens on the internet(g) and later in The Lost Civilisation Enigma, reviews[1275.16] the early years of the Glozel debate in which his account reflected very badly on the professional archaeologists of the day and later. While the evidence now indicates that no fraud by Fradin was involved, there are still questions outstanding, relating to the mixed datings of the artefacts themselves.

(g) https://www.bibliotecapleyades.net/arqueologia/glozel.htm#Glozel – The Fraud or Find of the 20th Century