Iberia was the ancient name for the peninsula that is today home to Spain and Portugal. Most Iberian centred theories have identified Andalusia as the most likely location for Atlantis. 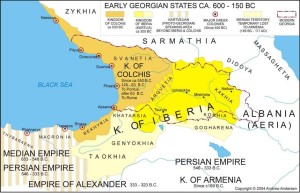 Iberia is also the name of an early kingdom on the eastern coast of the Black Sea, known as Kartli in Georgian. This fact is used by the Schoppes to support their Atlantis in the Black Sea theory. This ancient Iberia in the Caucasus is sometimes claimed as the original home of wine(a), now dated to around 6000 BC(d)!*However, the most recent studies place the earliest evidence for wine production in Italy in the 4th millennium BC.(c)

A short history of this Georgian Iberia is available online(b).