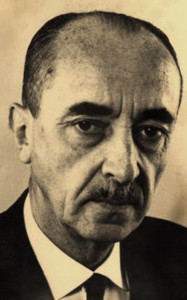 part of his life teaching in Argentina. During the war he was member of the Division Charlemagne, a military unit comprised of French volunteers in the German Wehrmacht. When Paris was liberated he fled to Argentina, where he became a naturalised citizen and a professor of anthropology.

He continued to espouse Nazi writing on politics and scientific racism. Following a trip to Paraguay he announced that he had uncovered evidence of a nomadic tribe of white Indians whose ancestors had been ‘Aryans of the Nordic race’. This claim seems like an echo of the story of Colonel Braghine who reported the existence of a tribe of white natives in Venezuela.  However, both the Mahieu and Braghine reports can be seen as being supported by the recent book[630] by Richard W. Welch in which he offers evidence of very early European settlers in America.

In 1985 Mahieu published Die Flucht der Trojaner[775] in which he claimed that the Trojans were originally white Libyans who had come from Scandinavia. After the Trojan War they fled to America where they came to be known today as Olmecs!