Menes, or Min according to Herodotus, is the name given to the first human ruler of Egypt. It is sometimes argued that it is in fact a title and may be a variant of Minos, the ruler of ancient Crete, just as Kaiser, Caesar and 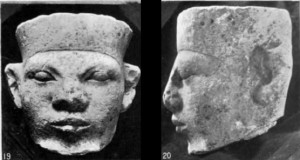 Czar have similar meanings. Consequently some claim that Menes should be identified with Narmer, Scorpion or Aha!

James Nienhuis has identified Menes with Mneseus the brother of Autochthon with whom he made up the third set of Poseidon’s twin sons that ruled Atlantis.

Modern research attributes a date of circa 3000 BC for the reign of Menes. Apparently Herodotus (Bk II. 99 & 142) was told by the Egyptian priests that Menes lived around 11,500 years earlier (10,000 BC). This discrepancy of around 7,000 years is comparable with the difference between the date for Atlantis given to Solon by Egyptian priests and the clear Bronze Age setting as recorded by Plato.

It is not unreasonable to speculate that this disparity may be the result of the priests using lunar cycles rather than solar years to calculate time.