Punt is the name given to a land with which the ancient Egyptians traded. The leading theory is that it was located to the southeast of Egypt, roughly occupying what is now called ‘the Horn of Africa, although there is also a popular view that it was situated on the Arabian Peninsula. Others suggest that a combination of parts of both regions might be nearer the truth. An article of November 2016 elaborates on the claim for this identification(e). 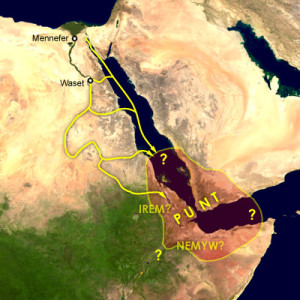 In 2013, a short book[1567] by Ahmed Ibrahim Awale, placed Punt in the same region, namely, in Hargeisa, the capital of Somaliland. A favourable and well illustrated review(f) of Awale’s book is worth a read.

Frank Joseph in his Atlantis Encyclopedia[0104.37] claims that “the Lands of Punt (are) often associated with the islands of Atlantis.” Joseph expands on this in an Atlantis Rising article(a) where he refers to an ancient Egyptian story of “The Shipwrecked Sailor” in which the ‘Serpent King’ is identified as master of the island of Punt, which again Joseph claims to be Atlantis.

More recently, a small number commentators have identified Punt/Atlantis with Indonesia(b)(c). Dhani Irwanto, who is a leading advocate of an Indonesian Atlantis[1093] published in November, 2015 an extensive article online(d) in which he specifically names the Indonesian island of Sumatera (Sumatra) as the land of Punt. He has now expanded this into a book, Land of Punt: In Search of the Divine Land of the Egyptians [1628].  Irwanto goes further and also identifies the mysterious land of Ophir in the Bible as Punt.