Strabo (c. 64 BC – 23 AD) was an important Greek geographer and historian 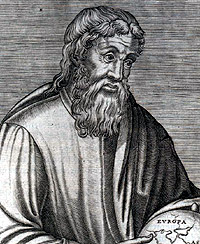 who wrote (i) of his full agreement with Plato’s assertion that Atlantis was fact rather than fiction.  An English translation of his Geography (Geographica) in three volumes can be read online [1647].

The location of the Pillars of Heracles, mentioned by Plato, is assumed by many to have always been situated near the Strait of Gibraltar. Other researchers have claimed that this was not the only location and have referred to various classical writers to support this contention, one of whom was Strabo, who records (ii) the variety of opinions regarding the location of the Pillars of Heracles among classical writers, adding that Alexander the Great on reaching the easternmost point in his military campaign erected an altar with ‘Pillars of Heracles’, giving further support to the view that the ‘Pillars’ were not a singular landmark but a feature that was to be found at different locations at different points in history. Strabo produced a map of Europe on which he located the ‘Pillars’ at Gibraltar in his day (1st century AD). Strabo also noted that, in the distant past 300 cities lined the coasts on either side of the Pillars.

Strabo also wrote (iii) of Hera’s Island as being one of two islands located near the Pillars of Heracles, beyond which was Gades in Spain. The two islands have not been identified. He was writing some centuries after Erathostenes had been the first to place the ‘Pillars’ at the western end of the Mediterranean.

James Bramwell has cast some doubt on the reliability of ancient geographers in general and Strabo in particular, whom he claims[195.129] oriented the Pyrenees as running north-south rather than their actual east-west.>Nevertheless, Strabo’s reputation would appear to have been enhanced by the discovery a few years ago that Piraeus, a small peninsula near Athens had been an island around 6,000 years earlier. Over time, sedimentary deposits had gradually built into an isthmus joining the island to the mainland. Strabo had recorded the earlier island status of Piraeus two thousand years ago, millennia after the event and unconfirmed until now(a).<

I should mention that, coincidentally, a temple of Hera was discovered near Marsaxlokk on Malta, the larger of the two principal Maltese islands.