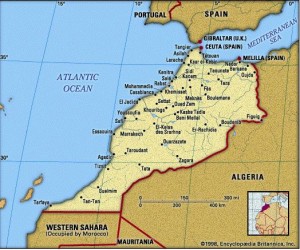 Very early human occupation of Morocco was confirmed in 2007 when beads were discovered in a cave in Eastern Morocco dated to around 80000 BC. A few years earlier a prehistoric city, dated to 13000 BC, was discovered in Western Sahara controlled by Morocco.

*This is has now been overshadowed by a 2017 report(c) that the remains of early relatives of homo sapiens had been discovered in Morocco and dated to between 300,000 and 350,000 years ago.*

Morocco was suggested as the possible location *of Atlantis as early as 1868 by D.A. Godron. A few years later E.F Berlioux and Gustave Lagneau, a French anthropologist adopted the same idea. They were followed by a number of other commentators such as A.F.R. Knötel and Eduardo Saavedra, but the theory seems to have had little support beyond the 1920’s.

Erick Wright, another regular contributor to Atlantis Rising forums, had supported Bergman’s idea of Atlantis in Morocco. However he now finds that his investigations have forced him to review his position and has opted for a location in southern Turkey.

Georgeos Diaz-Montexano favours the region on both sides of the Strait of Gibraltar as the original realm of Atlantis with the location of the capital city now submerged. In a similar manner Thomas Dietrich in The Origin of Culture[217] considers Morocco an Atlantean colony.

More recent support for a Moroccan Atlantis was presented in a paper presented to the 2008 Atlantis Conference in Athens, by the late M. Hübner an independent German researcher, which offered circumstantial evidence for the existence of Atlantis in the southern Moroccan region of Souss-Massa-Draâ. His theory is supported with a website(b) that includes a number of video clips and a 32 page synopsis of his book, Atlantis? Ein Indiezienbeweis, which has yet to be published in English.

A.F.R. Knötel, a German geographer,was the author of a work in 1893 that placed Atlantis in Morocco and linked its priesthood with the religion of Thoth-Ouranos-Hermes. Jürgen Spanuth wrote that Knötel  considered Plato’s dating involving thousands of years as ‘complete nonsense’ [017.26]. A facsimile of the German text[0628]  can now be downloaded from the Internet.

Unfortunately, the book is printed with a gothic typeface that some, if not most, will find difficult to read.