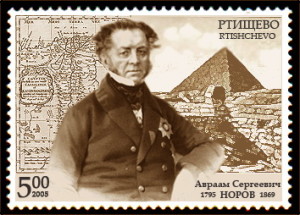 Avraam Sirgeievitch Norov (1795-1869) was, at one stage of his career, a minister of public instruction (1853-1858). Norov was probably the first Russian to produce an original work[491] on Atlantis. The German text is now available online(a).  He referred to a large number of Greek and Arabic sources and concluded that the Pillars of Heracles were located in the eastern Mediterranean and that they referred to shrines rather than geographical features.

Two of the renowned Arabic scholars quoted by Norov, al-Bruni and  al-Mas’udi, relate local stories that suggest a time when the Strait of Gibraltar did not exist as we know it. However, the accounts suffer from the inevitable distortions and accretions that can develop with ancient tales when transmitted orally.