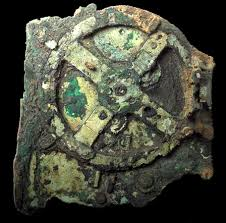 Very little intensive investigation was done until the early 1950’s when Derek J. de Solla Price (1922-1983) a professor at Yale University undertook a study of the Mechanism. His conclusions were published in a number of papers including Gears from the Greeks, now available as a pdf file(r).

It was originally dated to the 1st century BC and had been ascribed by some to the Greek astronomer Hipparchos, but recent research by Professor Alexander Jones of New York’s Institute for the Study of the Ancient World has pushed this back to the 2nd century BC(b). Jones dismissed as ‘desperate’ a suggestion by Dr. Jo Marchant, that the mechanism had been part of a timepiece that possibly controlled the sequential appearance of figures to indicate seasons. Marchant is the author of Decoding the Heavens: Solving the Mystery of the World’s First Computer[1460].

A report(n) published in November 2014 revised further the date of its creation back to 205 BC. This modification includes the suggestion that the mathematics upon which the Mechanism were based were Babylonian rather than Greek. The level of ancient Greek celestial knowledge is also being reappraised in the light of a recent study of a decorated cup of a type known as a skyphos(o).

At same time, a possible connection with the renowned Archimedes was being posited by some commentators(f). An even more remarkable feature was the clever use of two gears, one positioned slightly off-centre in relation to the other, allowing the mechanism to track the apparent speeding up and slowing down of the moon each month, resulting from its elliptical rather than circular orbit(g).

Dr. Minas Tsikritsis, a Cretan researcher, maintains that an object from the Minoan Age discovered 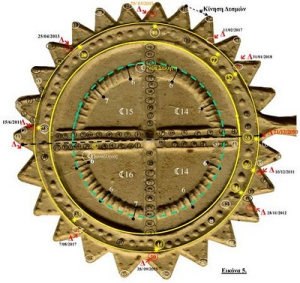 Commentators such as David Hatcher Childress see the Antikythera device as just another piece of evidence of more complex scientific knowledge among early cultures than is usually accepted and that by extension the possibility of a technologically advanced Atlantis[620].

>More recently (Feb.2020), Alexander Jones, has offered a highly technical investigation((ag) of the possible date for the construction of the Mechanism and concluded that “while the dating of the eclipse series inscribed on the Mechanism’s Saros Dial taken by itself may suggest a dating of the Mechanism’s construction somewhere within the 76 years after 205/204 BCE, other considerations such as the archaeological context in which it was found, together with what is otherwise known of the development of Greek astronomy in the Hellenistic period, may outweigh this preference and favor a later date.”<

Opus Gemini, a trilogy of novels by Andreas Möhn, based on the Antikythera Mechanism was published on Kindle format in September 2013 and is also available in other formats. Further information and updates are available on his website(m).

New Scientist announced on June 4th 2014(k) that plans have been made to dive again to the Antikythera wreck in the hope of finding a second ‘mechanism’, using a ‘wearable submarine’. The Sept/Oct season of 2014 ended with evidence that the ship had been up to 50 metres long, making it thelargest ancient shipwreck ever discovered(l).

The February 2015 edition of Smithsonian Magazine gives an up-todate review of the scientific studies of the Mechanism(p). In June 2016 the Smithsonian returned to the subject with an article(u) devoted to the extensive writing, some less than a millimetre tall, revealed by CT scans on virtually every surface. This recent study indicates that the Mechanism also appears to have an astrological purpose! These investigations also pointed to the Aegean island of Rhodes as its place of manufacture.

Inevitably, the suggestion has be made that first century BC Greeks could not have created the Mechanism without alien assistance as the following quote shows; “While many experts try to offer explanations for how this device could have been conceived, designed and built, all their concepts fail the tests of logic. There is only one possible explanation. Beings with advanced knowledge of astronomical bodies, mathematics and precision engineering tools created the device or gave the knowledge for its creation to someone during the first century B.C. But the knowledge was not recorded or wasn’t passed down to anyone else.“(x) It is also humourously ‘suggested’ that the early Greeks had laptops!!(q)

For the technically minded, a clockmaker known just as ‘Chris’ has an extensive website(y) where he has a number of videos illustrating how he has reconstructed copies of  individual components of the Antikythera Mechanism.

A few days ago (17.11.18) it was announced that a missing piece of the Mechanism had been found near the site of the original finds(ac). However, the Smithsonian Magazine swiftly adopted a more cautious approach(ad), claiming that it was probably not a piece of the Mechanism! Watch this space.