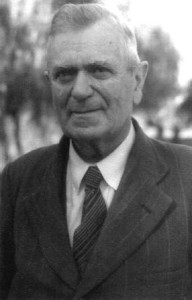 George F. Dodwell (1879-1963) was a leading Australian astronomer, who made an extensive study of ancient gnomons and discovered that they deviated from the expected. A gnomon is the part of a sundial that casts the shadow. He concluded that there was consistent evidence that the tilt of the earth’s rotational axis was altered around 2345 BC. This view supported those that have claimed that the poles shifted within the memory of man, possibly as a result of a close encounter or impact with an extraterrestrial body such as a comet. Some have gone further and attribute the destruction of Atlantis to this clash. Dodwell’s complete work on the subject can now be read on Barry Setterfield’s website(a).

Dodwell, a devout Christian, concluded that it was this sudden shift of the earth’s axis that led to the Flood of Noah. Rene Noorbergen (1928-1995) mentions in his Secrets of the Lost Races [612.20] that Dodwell wrote to Professor Arthur J. Brandenberger of Ohio State University, outlining his theory in the following manner; “I have been making during the last 26 years an extensive investigation of what we know in astronomy as the secular variation of the obliquity of the ecliptic. From a study of the available ancient observations of the position of the sun at the solstices during the last three thousand years, I find a curve which, after allowing for all known changes, shows a typical exponential curve of recovery of the Earth’s axis after a sudden change from a former nearly vertical position to an inclination of 26½ degrees, from which it was returned to an equilibrium at the present inclination of 23½ degrees during the interval of the succeeding 3,194 years to A.D. 1850. The date of the change in the Earth’s axis, 2345 B.C., is none other than that of the flood recorded in the Bible, and the resulting conclusion is that the Biblical account of the flood as a universal one, together with its story of Noah’s Ark, is historically true’.

>S.F. Wells published a paper(h) on Graham Hancock’s website in which he investigated the Avebury stone circle and its associated monuments and found evidence that they “show knowledge of past Polar positions”.<

In the interests of balance, I must refer readers to an extensive 2013 paper(f) by a creationist, Dr. Danny Faulkner, who has cast doubts on Dodwell’s conclusions.

Another interesting comment is offered by Barry Setterfield, who wrote(a) that “ Dodwell has assumed here that the original axis tilt of the earth, before 2345 B.C., was nearly upright.  For that reason, he supposed a very strong impact was necessary to jolt the earth from that position to its current 23.5 degree tilt.  This is why a number of astronomers have rejected Dodwell’s work in this area.  However, if the axis tilt was greater than its current axis tilt before 2345 B.C., then an impact of much less force would have been required to restore the earth to a slightly more upright position.  The evidence for this greater axis tilt may be seen in the evidence of the ice age which covered most of Europe prior to 2345 B.C.”

In 2011, Mike Baillie, the renowned dendrochronologist, gave a PowerPoint presentation(d) at the Quantavolution Conference in Athens, which offered tree-ring evidence that clearly demonstrated an ‘event’ in 2345BC, which has counterparts in early Chinese and Middle East records suggesting a cometary encounter/impact! Baillie also notes that Isaac Newton and Edmund Halley both thought that Archbishop Ussher’s Flood of 2349 BC was due to a comet.

More recently, Andrew Bourmistroff, a Russian researcher, has determined that the orientation of the Great Pyramid at Giza is off by 9.85 degrees west of true north(e). The significance, if any, of all these details has yet to be fully determined.