Antonio Moreno Checa is a Spanish telecommunications engineer who plunged into the turbulent waters of Atlantology with the publication of La Atlántida. El mito hecho realidad (Atlantis. The myth comes true)[1063]. In it he argues that Atlantis had been situated in the centre of the Atlantic and that a meteorite impact ‘moved’ it to become what is now Greenland(c). The author contacted Diaz-Montexano for comment(a) and D-M responded with an extensive critique(b). 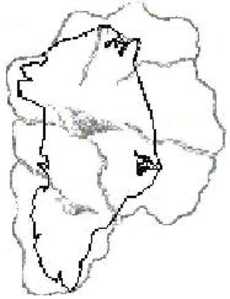 this idea. One of these is the American, Dale Huffman, who claims that the outline of Greenland is comparable with Kircher‘s famous map of Atlantis. He has also proposed that while Atlantis was primarily Greenland it also included “the islands of the United Kingdom and Iceland”(h).(see left)