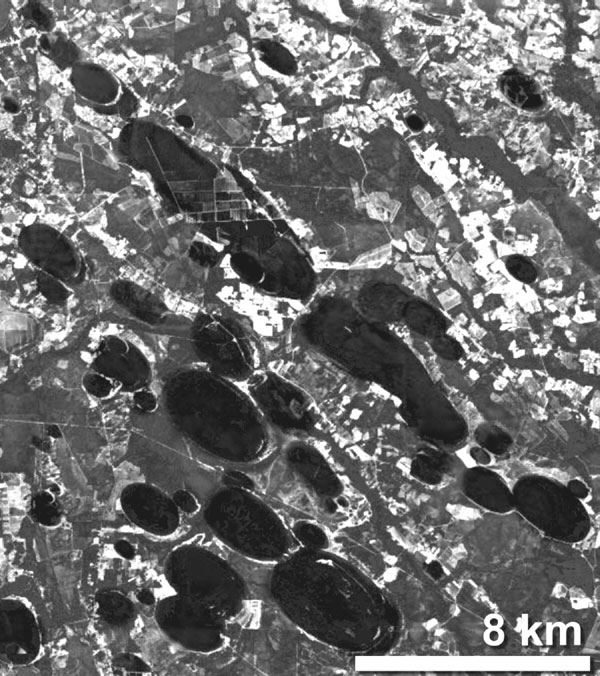 The cometary explanation was given additional support in 2007 when a team of researchers from Oregon University outlined evidence that included the Carolinas, for the disintegration of a comet over Eastern Canada around 10900 BC. They claim that apart from the initiation of the Younger Dryas period, it caused widespread destruction across North America and also led to the disappearance of the Clovis culture. Further evidence supporting this view(b) was advanced by other academics in 2008.

Nevertheless, there is also evidence from optically stimulated luminescence (OSL) dating that the bays were formed 80,000 -100,000 years BP, which conflicts with the YD date! My layman’s view is that after 80,000 year I would expect the bays to be much more eroded than they appear to be.

A more recent paper(e) by Antonio Zamora offers an important new concept, namely that the ‘bays’ were created by a meteorite striking the Laurentide Ice Sheet that existed in the Great Lakes region, during the last Ice Age, which in turn produced an enormous hail of ice ejecta which rained down on the eastern seaboard of what is now the United States. In his conclusion he claims “that  the new model of slow-velocity impacts from ice ejecta resulting from a meteorite impact on the Laurentide ice sheet explains many of the characteristics of the Carolina Bays, including the lack of shock metamorphism and meteorite fragments.” Zamora has also published in 2012 an ebook entitled Meteorite Cluster Impacts[1120](f), and in his 2015 book, Solving the Mystery of the Carolina Bays[1121], he expands on his theory that the ‘Bays’ were created as a result of an extraterrestrial impact with the Laurentide Ice Sheet. He describes in great detail the mathematical basis for his views.

*Robert W. Felix, an American architect totally rejects the ice ejecta theory, principally on the grounds that the Laurentide Ice Sheet (LIS) should have disappeared before the creation of the Carolina Bays(l). However, conventional wisdom dates the decline of the LIS to around 9,600 BC(m), coincidental with the arrival of the Carolina Bats! Felix contends in one of his books [1688] that the Bays were formed by millions of gigantic explosions in the sky, explosions triggered by a magnetic reversal!* 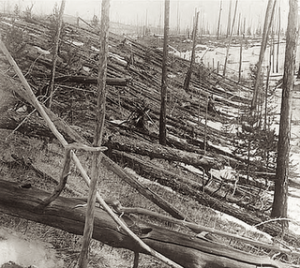 In 2013 Gernot Spielvogel co-authored Sonnenbomben[1582] in which it is suggested that the Tunguska event was caused by a solar plasma ‘bomb’!>Even Nikola Tesla was blamed by some as the perpetrator of the Tunguska event(n).<