Paulino Zamarro, born in 1947, in Cantalejo, Segovia, Spain and is now living 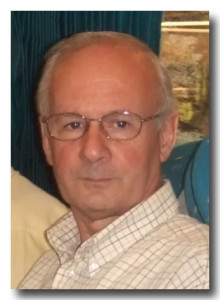 in Madrid. He is an industrial engineer specialising in chemistry and has worked for over twenty years on environmental studies. Among his ecological publications, in Spanish, is a monograph on a wetland near his birthplace – The Lagoons of Catalejo.

He is also the author of  Del Estrecho de Gibraltar a la Atlantida (From the Strait of Gibraltar to Atlantis)[0024], in which he puts forward a number of radical ideas.  He first proposes that an isthmus at the Strait of Gibraltar had been created as a result of silting. He then claims that at the end of the last Ice Age this landbridge was breached leading to the destruction of Atlantis. Both Strato and Seneca refer to the breaking of the Gibraltar dam. Zamarro dates the breach to circa 5500 BC.

He places Atlantis in the Cyclades in the Eastern Mediterranean, which had originally been a single landmass and identifies a tiny island called Pori north of the island of Antikythera as the site of the Pillars of Heracles. Fifteen years later Christos A. Djonis proposed a location in the same region without giving any credit to Zamarro. He highlighted the multiplicity of locations that have been designated as the site of the ‘Pillars’. 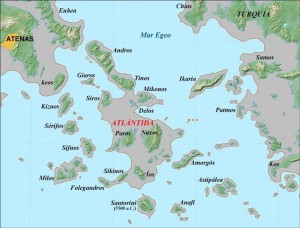 To-date the book has only been published in Spanish, although Zamarro is anxious to have it published in English. His ideas are summarised on a website(a) promoting the book, which can be translated by your browser.

Zamarro has recently added a further site(b) where the first 100 pages of his book (in Spanish) can be read online. A revised second edition of his book was published in 2012 with the slightly shortened title of De Gibraltar a la Atlántida and also available in the Kindle format.