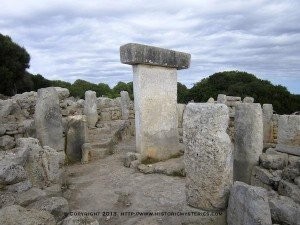 Peter Hochsieder & Doris Knösel have published[1064] an extensive study of the thirty-one taulas remaining, including an investigation of their possible archaeoastronomical significance.*A recent study(g) of Neolithic tombs in Monte Revincu, appears to confirm that these monuments had an astronomical orientation, supporting the opinions of Michael Hoskin as well as those of Hochsieder & Knösel(h).*

I have commented elsewhere that the shape of the taulas is remarkably like that of the monuments found at Göbekli Tepe!