The Minoan Hypothesis proposes an eastern Mediterranean origin for Plato’s Atlantis centred on the island of Thera and/or Crete. The term ‘Minoan’ was coined by the renowned archaeologist Sir Arthur Evans after the mythic king Minos. (Sir Arthur was the son of another well-known British archaeologist, Sir John Evans). Evans thought that the Minoans had originated in Northern Egypt and came to Crete as refugees. However, recent genetic studies seem to indicate a European ancestry! 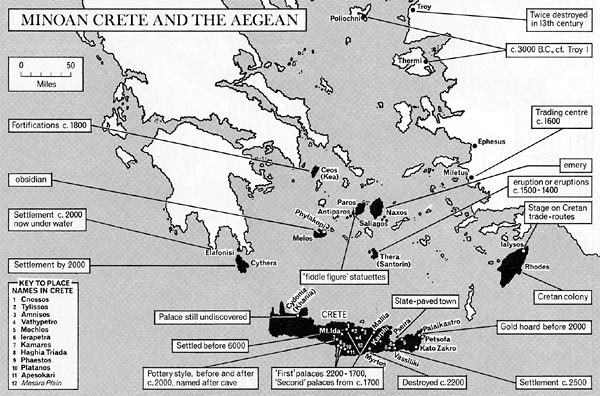 claimed(a) that Minoan influence extendedas far as the Iberian Peninsula as early as 3000 BC and is reflected there by what is now known as the Los Millares Culture. Minoan artifacts have also been found in the North Sea, but it is not certain if they were brought there by Minoans themselves or by middlemen. The German ethnologist, Hans Peter Duerr, has a paper on these discoveries on the Academia.edu website(e). He claims that the Minoans reached the British Isles as well as the Frisian Islands where he found artifacts with some Linear A inscriptions near the site of the old German trading town of Rungholt, destroyed by a flood in 1362(f).

The advanced shipbuilding techniques of the Minoans are claimed are claimed to have been unmatched for around 3,500 years until the 1950’s(l).

The Hypothesis had it origin in 1872 when Louis Guillaume Figuier was the first to suggest[296] a link between the Theran explosion and Plato’s Atlantis. The 1883 devastating eruption of Krakatoa inspired Auguste Nicaise,  in an 1885 lecture(c) in Paris, to cite the destruction of Thera as an example of a civilisation being destroyed by a natural catastrophe, but without reference to Atlantis.

The Minoan Hypothesis proposes that the 2nd millennium BC eruption(s) of Thera brought about the destruction of Atlantis. K.T. Frost and James Baikie, in 1909 and 1910 respectively, outlined a case for identifying the Minoans with the Atlanteans, decades before the extent of the Theran eruption was fully appreciated by modern science. In 1917, Edwin Balch added further support to the Hypothesis[0151].

As early as April 1909 media speculation was already linking the discoveries on Crete with Atlantis(h), in spite of Jowett’s highly sceptical opinion.

Supporters of a Minoan Atlantis suggest that when Plato wrote of Atlantis being greater than Libya and Asia he had mistranscribed meson (between)as meizon (greater), which arguably would make sense from an Egyptian perspective as Crete is between Libya and Asia, although it is more difficult to apply this interpretation to Thera which is further north and would be more correctly described as being between Athens and Asia. Thorwald C. Franke has now offered a more rational explanation for this disputed phrase when he pointed out[750.173] that “for Egyptians the world of their ‘traditional’ enemies was divided in two: To the west there were the Libyans, to the east there were the Asians. If an Egyptian scribe wanted to say, that an enemy was more dangerous than the ‘usual’ enemies, which was the case with the Sea Peoples’ invasion, then he would have most probably said, that this enemy was “more powerful than Libya and Asia put together”.

It has been ‘received wisdom’ that the Minoans were a peace-loving people, in fact Dr. Barry Molloy of Sheffield University has now shown that the exact opposite was true(d) and that “building on recent developments in the study of warfare in prehistoric societies, Molloy’s research reveals that war was in fact a defining characteristic of the Minoan society, and that warrior identity was one of the dominant expressions of male identity.”

In 1939 Spyridon Marinatos published, in Antiquity, his opinion that the eruption on Thera had led to the demise of the Minoan civilisation. However the editors forbade him to make any reference to Atlantis. In 1951, Wilhelm Brandenstein published a Minoan Atlantis theory, echoing many of Frost’s and Marinatos’ ideas, but giving little credit to either.

However, Colin MacDonald, an archaeologist at the British School in Athens, is of the opinion that “Thira’s eruption did not directly affect Knossos. No volcanic-induced earthquake or tsunami struck the palace which, in any case, is 100 meters above sea level.” The Sept. 2019 report(n) in Haaretz suggests it’s very possible the Minoans were taken over by another civilization and may have been attacked by the Mycenaeans, the first people to speak the Greek language and they flourished between 1650 B.C. and 1200 B.C. Archaeologists believe that the Minoan and Mycenaean civilisations gradually merged, with the Mycenaeans becoming dominant, leading to the shift in the language and writing system used in ancient Crete.

The greatest proponents of the Minoan Hypothesis were arguably A.G. Galanopoulos and Edward Bacon. Others, such as J.V. Luce and James Mavor were impressed by their arguments and even Jacques Cousteau explored the seas around Santorini, while Richard Mooney, the ‘ancient aliens’ writer, thought[0842] that the Minoan theory offered a credible solution to the Atlantis mystery. More recently Elias Stergakos has proposed in an overpriced 68-page book[1035],  that Atlantis was an alliance of Aegean islands that included the Minoans.

Further opposition to the Minoan Hypothesis came from R. Cedric Leonard, who has listed 18 objections(q) to the identification of the Minoans with Atlantis, keeping in mind that Leonard is a advocate of Atlantic location for Plato’s Island.

The Minoan Hypothesis remains one of the most popular ideas with the general public although it conflicts with many elements in Plato’s story. A few examples of which are: where were the Pillars of Heracles? How could Crete/Thera support an army of one million men? Where were the Elephants? There is no evidence that Crete had walled cities such as Plato described. The Minoan ships were relatively light and did not require the huge harbours described in the Atlantis story.

Plato describes the Atlanteans as invading from their western base (Tim.25b & Crit.114c); Crete/Santorini are not west of either Egypt or Athens

Gavin Menzies has now attempted to become the standard bearer for the Minoan Hypothesis. In The Lost Empire of Atlantis[780] he argues for a vast Minoan Empire that spread throughout the Mediterranean and even discovered America [p.245]. He goes further and claims that they were the exploiters of the vast Michigan copper reserves, which they floated down the Mississippi for processing before exporting it to feed the needs of the Mediterranean Bronze industry. He also accepts Hans Peter Duerr’s evidence that the Minoans visited Germany regularly [p.207].

Tassos Kafantaris has also linked the Minoans with the exploitation of the Michigan copper, in his paper, Minoan Colonies in America?(k) He claims to expand on the work of Menzies, Mariolakos and Kontaratos. Another Greek Professor, Minas Tsikritsis, also supports the idea of ancient Greek contact with America. However, I think it more likely that the Minoans obtained their copper from Cyprus, whose name, after all, comes from the Greek word for copper.

Frank Joseph has criticised[802.144] the promotion of the Minoan Hypothesis by Greek archaeologists as motivated by nationalism rather than genuine scientific enquiry. This seems to ignore the fact that Nicaise and Figuier were French, Frost, Baikie and Bacon were British, Luce was Irish and Mavor was American. Furthermore, as a former leading American Nazi, I find it ironic that Joseph is now preaching about the shortcomings of nationalism.

While the suggestion of an American connection may seem far-fetched, it would seem mundane when compared with a serious attempt to link the Minoans with the Japanese based on a study(o) of the possible language expressed by the Linear A script.>Gretchen Leonhardt(r) also sought a solution in the East, offering a proto-Japanese origin for the script, a theory refuted by Yurii Mosenkis(s), who promotes Minoan Linear A as proto-Greek. Mosenkis has published a number of papers on the Academia.edu website relating to Linear A(t). However, writing was not the only cultural similarity claimed to link the Minoans and the Japanese offered by Leonhardt.<

Furthermore, Crete has quite clearly not sunk beneath the waves. Henry Eichner commented, most tellingly, that if Plato’s Atlantis was a reference to Crete, why did he not just say so? After all, in regional terms, ‘it was just down the road’. The late Philip Coppens was also strongly opposed to the Minoan Hypothesis.(g)

Eberhard Zangger,who favours Troy as Atlantis, disagrees strongly[484] with the idea that the Theran explosion was responsible for the 1500 BC collapse of the ‘New Palace’ civilisation.

Excavations on Thera have revealed very few bodies resulting from the 2nd millennium BC eruptions there.The understandable conclusion was that pre-eruption rumblings gave most of the inhabitants time to escape. Later, Therans founded a colony in Cyrene in North Africa, where you would expect that tales of the devastation would have been included in their folklore. However, Eumelos of Cyrene, originally a Theran, opted for the region of Malta as the remnants of Atlantis. How could he have been unaware of the history of his famous homeland?

A 2008 documentary, Sinking Atlantis, looked at the demise of the Minoan civilisation(b). There is also an interesting article from James Thomas, who has published an extensive study of the Bronze Age, with particular reference to the Sea Peoples and the Minoans(j).

More extreme is the theory of L. M. Dumizulu, who offers an afrocentric view of the Atlantis. He claims that Thera was part of Atlantis and that the Minoans were black!(m)

In February 2020, art historian and museum educator, Roger Dell, presented an illustrated lecture on the art and religion of the Minoans titled “How the Matriarchal Minoans Began Western Civilization; And Why They Disappeared,” which offered a new dimension to our understanding of their culture(p).

In 2019, Nick Austin attempted [1661] to add further support to the idea of Atlantis on Crete, but, in my opinion, he has failed.