Graham Island was named by the British after Sir James Graham, the First Lord of the Admiralty, when the British planted their flag on it after it last appeared above the waves in 1831. Their claim was disputed by the French, Spanish and the King Ferdinand II of the Two Sicilies (Sicily & Naples) after whom it was named Ferdinandea. Fortunately, conflict was avoided when the island disappeared within a year(a).

Graham’s Island situated in the Strait of Sicily is one of a number of volcanic islands that have been created by underwater eruptions. Frequently they only last above water for a short period, eventually sinking back under the sea. These events are frequently cited as an explanation for the demise of Atlantis. However, a cursory examination of the facts show that such a comparison is untenable. First of all the island of Atlantis described by Plato is quite extensive containing a large plain surrounded by mountains plus a varied range of flora and fauna. Secondly, the island of Atlantis had been inhabited for a considerable period and finally Atlantis according to Plato was destroyed by an earthquake not volcanic action. We have never had a record of a very large, long established island being destroyed by a volcano. 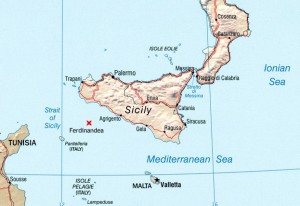 At present, the remains of Graham’s Island lie just 20 feet below sea level and in 2000 and 2002 have again shown signs of activity. In 1986, today’s masters of high-tech warfare, the United States, mistook the sunken remains of the island for a Libyan submarine and dropped depth charges on it!