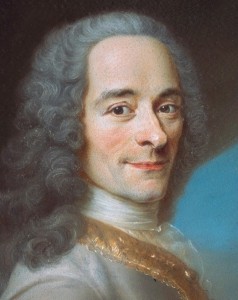 a prominent French philosopher and a prolific writer on a wide range of subjects with an estimated output of more than 2,000 books and pamphlets and 20,000 letters.

Jean Sylvain Bailly wrote a series of letters addressed to Voltaire on the subject of Atlantis, an English translation of which has been published by the British Library[926] .

However, it appears that Voltaire was somewhat sceptical about the existence of Atlantis remarking in Essai sur le moeurs[1504] that “ if it were true that such a part of the world ever existed. Most likely it was none other than the island of Madeira.”

Anyone researching Atlantis might be advised to remember Voltaire’s aphorism which states that while “doubt is not a pleasant mental state, certainty is an absurd one.”