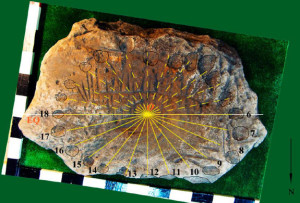 Gnomons are the vertical markers of sundials that casts the sun’s shadow. The oldest known sundial is possibly the one found in a burial mound in 2011 near Donetsk in Ukraine(c). Herodotus tells us that the Greeks learned the use of dials from the Chaldeans. The use of gnomons by the ancient Egyptians is thought to be as early as 3500 BC(d).

Gnomons are also used to cast the shadows, by which means latitude can be calculated. Furthermore, the earth’s tilt (obliquity-of-the-ecliptic) may also be calculated using gnomon data and it was this feature that created problems for the Australian G.F. Dodwell who carried out a study of gnomons around the world over the past 4,000 years. It is generally accepted that the tilt of the earth’s axis varies cyclically between 22 and 24.5° over a period of some 40,000 years due to a number of factors. Dodwell’s difficulty was that his investigations revealed a distinct deviation from the expected, around 2345 BC. The only conclusion that Dodwell could arrive at was that either ancient observations were systematically in error all over the world or the earth’s tilt angle had been altered during historical times.