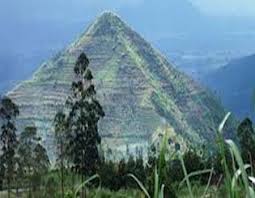 Atlantis. A few years ago the late Arysio dos Santos was the leading proponent of Sundaland, which included Indonesia, as Atlantis. Now Danny Hilman Natawidjaja an Indonesian geologist has made a similar claim in his Kindle ebook, Plato Never Lied: Atlantis Is in Indonesia[961]. In it Gunung Padang plays an important role. Mount Padang has also been claimed as the world’s oldest pyramid!

Graham Hancock has written a review(b) of the excavations at Gunung Padang  and in October 2014 added further comments(d). Robert Schoch has also offered a geologist’s view of the site(f).

We now (Nov. ’14) have a report(e) that some type of ‘electrical device’ has been discovered at the site ‘made out of gold and copper and seems to resemble a primitive electrical capacitator.’ Until further information is available this claim must be treated with caution.

There are, however, dissenting voices as reported by journalist, Michael Bachelard(g), such as vulcanologist Sutikno Bronto, who says “Gunung Padang is simply the neck of a nearby volcano, not an ancient pyramid.Danny Hilman is not a vulcanologist. I am.” As for the carbon-dated cement between the stones, on which Hilman relies for his claims about the age of the site, Sutikno believes it is simply the byproduct of a natural weathering process, ”not man-made”. Other sceptics are even tougher. One archaeologist, who does not wish to be named since the President took such an interest, says the presidential taskforce is deluding itself. ”In the Pawon cave in Padalarang [about 45 kilometres from Gunung Padang], we found some human bones and tools made of bones about 9500 years ago, or about 7000 BCE. So, if at 7000 BCE our technology was only producing tools of bones, how can people from 20,000 BCE obtain the technology to build a pyramid?” the archaeologist asks.

Indonesia in recent years have seen an increasing number of supporters for the idea of Atlantis being located in the vicinity of today’s archipelago, prior to the ending of the last Ice Age, on the submerged continental shelf now frequently referred to as Sundaland. The redating of cave paintings on the island of Sulawesi suggests that they are as old as any in Europe(h), possibly stretching back as far as 40,000 years. A 2016 report(j) has now pushed back the earliest human occupation on Sulawesi to 100,000 years ago.

As far as I can ascertain the earliest suggested linkage between Atlantis and Indonesia came from the leading Theosophist, C. W.Leadbeater (1854-1934). In a booklet, The Occult History of Java[1094],  published in 1951 he proposed that Java had been an Atlantean colony.

However, it is reported(g) that Sukarno (1901-1970), the first president of Indonesia, spoke of Atlantis nearly half a century ago when he located it in the Atlantic

William Lauritzen was probably the first to advocate this idea of a Sundaland connection on his website, but it seems that the concept was given a huge boost by the publication of the late professor Arysio Nunes dos Santos’ book Atlantis: The Lost Continent Finally Found[320].

The idea was given a boost in February 2012 when it was reported(a) by a somewhat incredulous Jakarta Post that the Indonesian president had given his support to a search for an ancient sunken civilisation in Indonesian waters following meetings with researchers including British author Stephen Oppenheimer.

May 2013 saw The Jakarta Post report(b) the publication of a book by local geologist, Danny Hilman Natawidjaja in which he claims that Atlantis was part of prehistoric Indonesia. In the book, entitled Penemuan Atlantis Nusantara (The Discovery of Atlantis in the Archipelago) he claims to base his theory on Plato’s text. However, commenting on the book the Indonesian archaeologist Daud Aris Tanudirjo said that Natawidjaja’s claim was ‘premature’, pointing out that the author had only an English translation of Plato’s text to work with and suggesting that Natawidjaja had no knowledge of ancient Greek. Further background information was subsequently made available(c).

Natawidjaja also claims that a site at Gunung Padang, 120 km southwest of Jakarta may be more than 9,000 years old! Graham Hancock   has expanded on this idea(e). Nevertheless, a recent assault on Natawidjaja’s theories in an open letter(m) from Rebecca Bradley, has laid bare the weaknesses in his contentions.

In 2015 Dahni Irwanto published Atlantis: The lost city is in Java Sea[1093], in which he located the biblical Garden of Eden and the legendary island of Taprobane on the Indonesian island of Kilimantan (Borneo) and placed Atlantis off its coast.*Irwanto has built on the work of  Santos, expanding Santos’ 32-checklist to 60 headings. In his well illustrated book Irwanto goes further with the suggestion that Atlantean Indonesia was a cultural centre from which post-diluvian refugees spread throughout the world influencing the great civilisations of Asia, the Mediterranean and the Americas.(p.143) He subsequently published Sundaland: Tracing the Cradle of Civilization (1618) in which he develops his idea that ancient Indonesia was a hyperdiffusionist hub. Although I found this book interesting, I thought it over speculative.

While Irwanto’s theories may be hard to accept, at least he presents then in a rational coherent manner, the same cannot be said of Turangga Seta, an Indonesian Atlantis-obsessed group, who place Atlantis in the Java Sea. Their leader, Timmy Hartadi, explains that their beliefs are based on psychic conversations with their ancestors!(n)

Coincidentally, Delisle de Sales, writing in the 18th century cited an anonymous source who placed Atlantis in Taprobane, considered at the time to be a reference to Ceylon (now Sri Lanka), not Irwanto’s Indonesian Kilmantan.

A short April 2016 blog(k) suggests that Quranic Archaeology may be used to support the idea of an Indonesian Atlantis, a sentiment expressed again a month later(l).