Henry Beckles Willson (1869-1942) was a Canadian soldier, journalist and historian. Part of his prolific output was a 1902 booklet entitled  Lost England: The Story of Our Submerged Coasts [1427], which was reprinted in 1986 as Lost Lyonesse: Evidence, Records and Traditions of England’s Atlantis with an introduction by John Michell. In the original book, Willson refers to the land, now lost, which stretched from Land’s End to the Scilly Isles without any mention of Atlantis. That reference was only used in the title of the more recent reprint.

Lyonesse is a mythical land between Cornwall and the Scilly Isles that reputedly sank into the sea. Ancient maps indicate that most of the Scillies were united in Roman times(a) noted by Peter Stanier in his book[0997] about the region. Legend has it that it contained 140 temples. Mordred, is said to have fought his final battle with King Arthur at Lyonesse. This ancient tale has been regularly linked with the destruction of Atlantis. 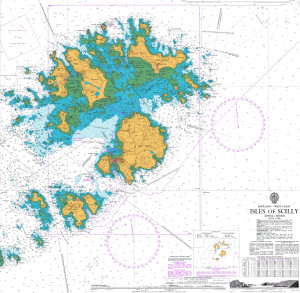 A team of Russian scientists were hoping to answer the two and a half thousand-year-old mystery regarding Plato’s Atlantis, with an investigation of the underwater ‘Celtic Shelf’ beyond the Scilly Isles. Viatcheslav Koudriavtsev, of the Moscow Institute of Meta-history, has used a re-interpretation of the classical Greek texts to locate the possible position of the fabled ancient lands. It is claimed that in the 1990’s the British authorities were set to issue a six-week licence for the exploration of Little Sole Bank, a conical submerged hill lying only 50m below the surface approximately 100 miles south-west of the mainland, but apparently due to a lack of funding nothing has been heard of the project since.

In 2012 the ‘micronation’ selfstyled as the Principality of Lyonesse declared its ‘independence’(b)(c).