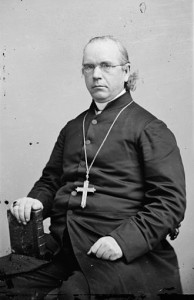 Patrick Neison Lynch (1817-1882) was the Irish-born third Catholic bishop of Charleston, South Carolina and a prominent slaveowner, having ninety-five slaves. He was appointed by Jefferson Davis, the Confederate President to go to Rome to seek the recognition of the southern breakaway states by the Vatican or more correctly the Papal States, as it was then.

In a newspaper report of a lecture(a) that he gave in 1867, Lynch declared “I shall take it as an established fact that America was peopled by the sons of Japheth.” whom he named more specifically as the Phoenicians. He also clearly attributed the ancient exploitation of the Michigan copper to the Phoenicians.

Lynch also identified America as Plato’s Atlantis, although he does not at any point refer to the Phoenicians as Atlanteans..

The Titans were the ancient gods during the Golden Age of Greece. They were later challenged by a race of younger gods, the Olympians, led by Zeus, to whom they lost in a conflict recorded dramatically in Hesiod’s Theogony. There were originally twelve Titans of whom one was Iapetus the father of Atlas, after whom Atlantis was named. The offspring of the original twelve were also designated as Titans.

Iapetus has been frequently equated with the biblical Japheth (Genesis 9.25-27), the son of Noah, a subject which is investigated at length on the vast and fascinating website(a) of Walter Reinhold Warttig Mattfeld y de la Torre.

Olaf Rudbeck believed that Japheth settled in Sweden after the Biblical Deluge and fathered Atlas, the first king of Atlantis. In a lecture(b) in 1867, Bishop Patrick Lynch of Charleston, S.C. declared “I shall take it as an established fact that America was peopled by the sons of Japheth.” whom he identified more specifically as the Phoenicians. Lynch also identified America as Plato’s Atlantis.