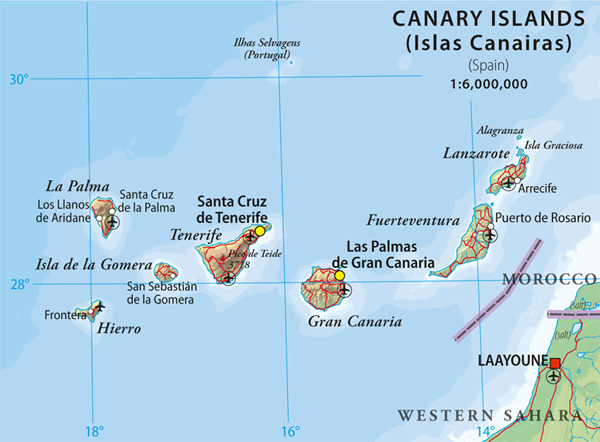 Frank Joseph noted[216] how the islands conform in many ways to Plato’s description of Atlantis. Natural hot and cold springs are to be found there, as are red, white and black rock, a combination also observed on the Azores. In the past the Canaries have been densely forested and also contain rivers and fertile plains that produce a variety of fruit.

In 1939 the Ahnenerbe, led by theologian turned archaeologist Otto Huth, planned to visit the Canaries to study  Guanche mummies as part of their efforts to find the Aryan homeland and locate Atlantis. However, the outbreak of war  postponed their trip, but the Spanish dictator, General Franco, at the behest of his Nazi mentors appointed his archaeologist friend Julio Martinez Santa Olalla to carry out investigations on their behalf. A paper(c) by Professor Francisco Gracia Alonso and a recent  book[762] by author and journalist Jaime Rubio Rosales explore the whole subject of the Spanish links with the Ahnenerbe.

In 1984 Manuel Gómez Márquez also ‘revealed’ the Canaries as the location of Atlantis in a book[0599] using the Piri Reis Map as a source.

One of the more recent proponents of a Canarian location for Atlantis is Charles D. Pfund in his extensive 2011 book Antediluvian World: The End of the Myth[1079].

Thor Heyerdahl inspected the pyramids at Guimar and was convinced of their ceremonial use in ancient times(b).The late Philip Coppens also wrote an article(e) on these structures. A 2015 article(f) can now be added to this list.