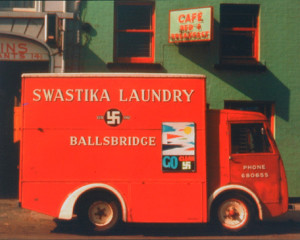 Another site demonstrates the widespread use of the swastika and its variants in commercial iconography(d). In April 2014, a well illustrated report(k) revealed that a 7,000-year-old piece of pottery with a swastika on it was discovered in Bulgaria.

I recall that my native Dublin had a firm, founded in 1912 by a Mr. Brittain, called the Swastika Laundry, which had their vans liveried in bright red with a white swastika on a black background. The business lasted into the 1960’s. James Churchward claimed that the swastika was a symbol of his invented civilisation, Mu, while Robert Stacy-Judd speculated[607.243] that it had originated in Atlantis. Others have attempted(e) to link the swastika and its presentation in red, white and black to be in some way connected with Plato’s reference to the colours of the rocks found in Atlantis.Leaving conjecture aside it can be demonstrated that the swastika was an ancient Hindu symbol and also used in the Indus Valley civilisation(b). 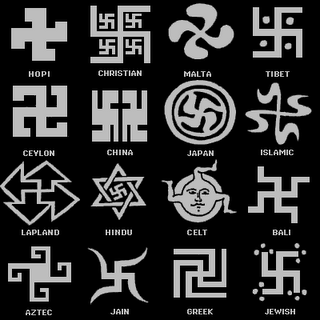 The long honourable history of the swastika should not be erased because of its abuse at the hands of the Nazis. The residents of Swastika in Ontario, have for decades steadfastly refused to change the name of their community, which has been in use since 1907. Jacques Gossart wrote a book[341] on the history of the swastika and in Denys Eissart’s now inactive website, L’épopée atlante (The Atlantis Epic) he devoted a page to a discussion on the subject(a). More recently Richard Cassaro has published two articles(f)(g) highlighting the extensive use of the swastika. The articles are well illustrated including some fascinating images. He also attempts, unsuccessfully in my view, to suggest a link between swastika and Atlantis. A Reclaim the Swastika website(j) is campaigning for the promotion of the swastika as a spiritual symbol as it had been in the past.

A number of large swastika shaped features have been spotted from the air(m). 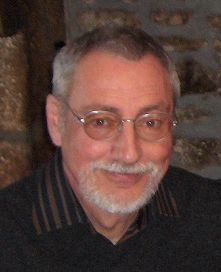 L‘épopée atlante (The Atlantis Epic) is a French website created by the classical scholar Denys Eissart. It was maintained from January 2001 until February 2007 although its content is still accessible(a). Ominously, I can find no reference to Eissart after early 2007. The site contains a wide range of Atlantis related articles and is certainly worth a visit.