Bosnia was dragged into the Atlantis debate in 2006 when a self-styled archaeologist, Semir Osmanagic, claimed that he had discovered five pyramids in his ancestral Bosnia near the town of Visoko. His claim received widespread media coverage and sparked a debate that continues today. 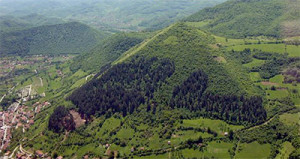 Osmanagic maintains that the largest one is bigger than the Great Pyramid at Giza, and that the Bosnian pyramids date to 12,000 B.C. In response Archaeology Magazine noted that “Construction of massive pyramids in Bosnia at that period is not believable. Curtis Runnels, a specialist in the prehistory of Greece and the Balkans at Boston University, notes that “Between 27,000 and 12,000 years ago, the Balkans were locked in the last Glacial maximum, a period of very cold and dry climate with glaciers in some of the mountain ranges. The only occupants were Upper Paleolithic hunters and gatherers who left behind open-air camp sites and traces of occupation in caves.”(j)

The Atlantis connection emerged from the belief of Osmanagic that the original ancestors of the Maya, Basques and other ancient peoples were descended from the peoples of Atlantis and Lemuria whose founders arrived on earth from the Pleiades. According to Osmanagic’s strange logic this gives the ‘pyramids’ of Bosnia an Atlantean pedigree.

In 2006, Robert Schoch visited the Bosnian ‘pyramid’ and subsequently wrote a highly critical assessment of Osmanagic and his theories. However, some time later, Osmanagic responded with a scathing review(c) of Schoch’s work!

In September 2014 the Science Channel aired an episode of The Unexplained Files series in the US, which attempted to justify Osmanagic’s claims. However, Jason Colavito has highlighted the many flaws in the program’s content(d).

A more sober attempt to link the Bosnian region with Atlantis has been made by Fatih Hodzic(b). Part of his theory attempts to identify the thousands of stone blocks or ‘stecaks’, spread widely in Bosnia, as remnants of Atlantean buildings. His ideas are interesting but unconvincing.

In 2014, Paul A. LaViolette visited the Visko pyramid in Bosnia and published an extensive illustrated article in which he expressed his amazement at what he saw there and concluded(g) that he considers  “this to be one of the most important archaeological excavations going on at this time on our planet.”

Philip Coppens has also defended the reality of Osmanagic’s pyramids in The Lost Civilization Enigma[1275.39],  nevertheless, the debate is still open as can be seen in a February 2016 blog(f), in which many reasonable questions relating to the construction of the ‘pyramids are still unresolved. For my part, I find Osmanagic’s personal credibility questionable, considering his previous claims regarding Atlantis and ancient aliens, which are not, in my view, the conclusions of a person with his critical faculties intact.

Another claim from Osmanagic emerged in April 2016, when he claimed that huge stone spheres that exist in Bosnia ‘prove’ the existence of an advanced civilisation more than 1,500 years ago(e)!

>Nevertheless, a pretty vigorous defence of the reality of the Bosnia pyramids was published by Richard Hoyle on the Ancient Origins website in January 2020(k).<