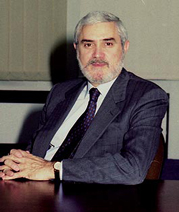 Flavio Barbiero was born in 1942 in Pula, Croatia. He entered the Naval Academy at Livorno in 1961. He pursued his scientific studies at Pisa’s University from where he graduated as an engineer in 1967. He has spent most of his professional life in the Research Centre of the Italian Navy, working on interdisciplinary projects, where he became a specialist in gyroscopic phenomena. He retired in 1998 with the rank of Admiral.

Barbiero is quite clearly a cultured man with a wide range of interests and has been fortunate in being able to combine his naval career with his other activities as a researcher, writer, and lecturer. He has organized and led two scientific expeditions to the Antarctic (in 1976 and 1978). As a member of the Italian Scientific Institution – Centro Camuno di Studi Preistorici, he participated in archaeological researches in Israel. Barbiero is the author of many articles and books on a variety of subjects, ranging from geology to the Bible. His most recent book, La Bibbia Senza Segreti[1425],  is still to be released in an English translation under the title The Book of the Law.

*He has also written a paper(f)  on the location of Mt. Sinai, which he places in the Negev Desert at Har Karkom, following the work of Prof. Emmanuel Anati*

Since 1974, Barbiero has, been an ardent promoter of the controversial idea of Atlantis being located in Antarctica. This belief is the result of his studies into the possibility of a rapid pole shift. He submitted a paper on the subject to the 2008 Atlantis Conference in Athens. Some excerpts are available online(b) with an English translation provided. A more extensive paper in support of his views was published on Graham Hancock’s website in 2006(a).

It is worth noting that although his book[0061] predates the more widely publicised work of the Flem-Aths, it was published in Italian and was probably unknown to them when they published their own book[0062] and as far as I can determine, Barbiero’s original work, Una civiltà sotto ghiaccio, (One Civilisation Under the Ice),  is still only available in Italian. Like the Flem-Aths, Barbiero has also proposed a Pole Shift that was caused by an impact with an asteroid or comet(d).

*In 2007, Barbiero delivered a paper(e) to the 2007 Conference on Quantavolution in the Swiss town of Kandersteg. The theme of his address concerned the possible effects of an asteroidal or cometary impact with the Earth with particular reference to pole shifts. He has some interesting comments, but for many, such as myself, the section with the mathematical formulae is rather daunting.*

However, in 2010 he published, in English, The Secret Society of Moses[1102] , in which he investigates the disappearance of Moses’ descendants from the historical record.

Barbiero has also written an extensive paper(c) in which he precisely dates the biblical Exodus to the night of the 14th and 15th of July of 1208 B.C.