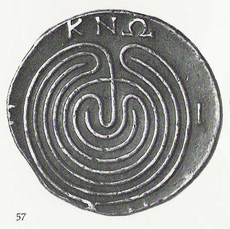 The Labyrinth and the double-headed axe, the labyris, are usually associated with Minoan culture. However, the labyrinth is an ancient symbol found around the world in locations such as Italy, India(g), Egypt(h), England, Finland and even in the New World as Evan Hadingham has shown[1309.261] at Pacatnamú in Peru. In Scandinavia they are known as Troy Towns –  Trojeborgar. Sweden has the greatest number with 200(e).

India’s second largest example, measuring 56 feet by 56 feet, was partly uncovered in Gedimedu near Pollachi(i) in 2015. It is estimated to be 2,000 years old and has a design similar to those found on clay tablets found at Pylos, Greece, from 1200 BC. 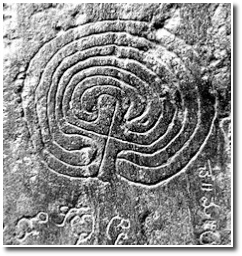 It has been suggested by a number of writers that the labyrinth had some connection with Atlantis(a)(b). This suggestion is interesting but highly speculative. J. D. Brady touches on this in his book,  Atlantis[0738] as well as Lewis Spence  in The History of Atlantis. What I find interesting is that so many widespread examples of the labyrinth retain the irregular elements of the symbol even when depicted in a rectangular rather than a rounded style. An extensive website covering all aspects of labyrinths and mazes is worth a visit(c). There is also The Labyrinth Society(f) to further whet your appetite.

*In 2017, an extensive article by John Reppion offers further information on the history and geographical spread of labyrinths(k).*