Seamounts are mountains that rise from the ocean floor but do not reach the water’s surface. However, during the last Ice Age when the level of the oceans were much lower a considerable number of these seamounts would have existed as islands that in many cases would have been quite substantial in area. Many of the thousands of seamounts around the world are of volcanic origin.

The Ampere and Josephine Seamounts, 450 miles west of Gibraltar were investigated by Soviet oceanographers, including Andrei Aksyonov,  in 1970’s(f). On examination of their underwater photographs they discerned what appeared to be ‘walls, stairs and other artificial stonework’ at a depth of around 200 feet, far less than the drop in ocean levels that occurred during the Ice Age. Egerton Sykes was convinced that these reports and associated photos revealed remnants of Atlantis or one of its colonies. Alexander Gorodnitsky also chose the vicinity of the Josephine and Ampere Seamounts as the site of Atlantis.

Josephine Seamount was claimed once again as the site of Atlantis by ‘Paulo Riven’ in 2003(b).

However, such claims must be treated with great caution until further corroboration is received. One Internet commentator has suggested(a) that the Amperes/Gettysburg Seamounts were once the location of a substantial island, containing Atlantis, which had been destroyed by asteroidal showers, combined with a nearby geological fracture. This same writer dates this disaster to 6482 BC.

Appropriately there is an Atlantis Seamount with its ‘Lost City’ hydrovents, where recent research(c) has drilled for samples of the lowest level of the Earth’s crust, which rests on the mantle.

Horseshoe Seamounts, is an extensive submerged chain of mountains north of the island of Madeira, in the Atlantic, opposite Gibraltar. Frank Joseph suggests[102] that the 6,000 sq. miles of this seamount was large enough to contain Plato’s Atlantis. Joseph has also written an article(g) on the Russian claims of discovering human artifacts on Ampere in the 1970’s. This should be read in conjunction with a short piece from Jason Colavito(h).

Another possible candidate was the Great Meteor Seamount, which was apparently shown on a 1707 map by French cartographer, Guillaume Delisle, as Saint Brendan’s Isle(e).

*Paul Dunbavin has added a paper(i) on his website in which he discusses the Ormonde and Gettysburg Seamounts, which are opposite the Strait of Gibraltar, and their possible relevance to the Atlantis story, as suggested by some. Dunbavin concludes that “It should be apparent that even if these two islets did appear above the sea during the Holocene then they cannot have been Atlantis. They are simply too small to hold all the features described.”*

The Azores, Canaries and Madeiras, in the Eastern Atlantic would have had larger landmasses exposed before the end of the last Ice Age because of the lower ocean levels. These archipelagos, together with seamounts, currently submerged, would have offered a substantial area of dry land, in a hospitable climate, on which a civilisation could have developed and flourished.

Another suggested connection between seamounts and Atlantis is made on a website(d) which nominates Dacia Seamount as its location with a series of interesting images and a lot of speculation.

Sonchis was the elderly Egyptian priest of Sais, who, according to Plutarch(a), related to Solon the story of Atlantis as recorded in their temple. These conversations took place around 590 BC. Additionally, Plutarch records that Solon also spoke with Psenophis a priest of Heliopolis.

Over four hundred years after Plutarch, Proclus named three priests that Solon had met in Egypt, Pateneit in Sais as well as Ochlapi at Heliopolis and Ethimon at Sebbynetus.

Another name suggested by Paulo Riven is that of Udja-Hor-res-ne (Wedjahor-Resne) which might relate to another priest or an alternative name for Sonchis. This person was not only a priest and physician but also an admiral. A headless statue of Udja-Hor-res-ne is to be found in the Vatican Museum. I would urge caution regarding this identification.

More recently, Robert McRoberts in an article about the rivers of Eden included map by Arianna Ravenswood, who placed Eden northwest of Babylon in what is now the Iraqi Province of Diyala(u).

Within the same region is a submerged location at the head of the Persian Gulf promoted by Juris Zarins (1945- )(w) . In his theory, the Bible’s Gihon River would correspond with the Karun River in Iran, and the Pishon River would match the Wadi Batin river system that had drained the now dry, but once quite fertile central part of the Arabian Peninsula. His suggestion about the Pishon River is supported by James A. Sauer (1945–1999) formerly of the American Center of Oriental Research although strongly criticized by the archaeological community(x) . 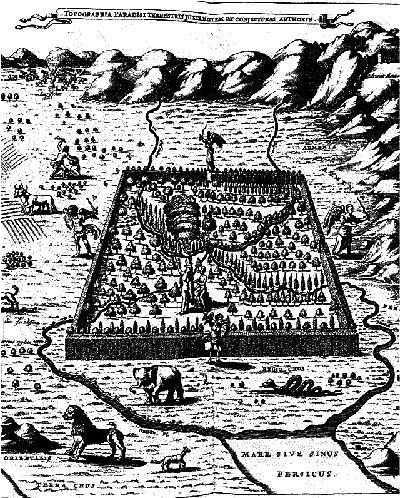 The conventional idea has been enhanced in the opinion of some by the discoveries of the German archaeologist, Klaus Schmidt, who believed that his excavations at Göbekli Tepe in Turkey have unearthed artefacts dating to 8000 BC, when the people there changed from hunting and gathering to agriculture. This region also contains Ur and Harran, mentioned in the Old Testament and as Göblekli Tepe is located between the Tigris and Euphrates and is within view of the Taurus Mountains, it conforms remarkably to the topographical description of Eden in the Bible.

General Gordon of Khartoum fame was so impressed by the island of Preslin in the Seychelles that he declared it to be the Garden of Eden and its famed Coco de Mer and breadfruit plants to be the Tree of Life and the Tree of Good and Evil. Science writer, Karl Shuker, has written an extensive article, Forbidden Fruit, for the January 2016 edition of Fortean Times, in which he gives the background to Gordon’s obsession and his inabilty to garner any serious support for it.

At the beginning of the 20th century it was reported(r) that G. F. Becker (1847-1919) a geologist with the USGS nominated Luzon in the Philippines as the site of the biblical ‘Garden’, while Sven Hedin (1865-1952) a much decorated Swedish geographer chose Janaidar a mythical city in Central Asia.

George H. Cooper, the American writer, identified Salisbury Plain[0236.111] as the Garden of Eden along with its Wiltshire river system matching the Euphrates and Tigris in the Genesis story.>W. Comyns Beaumont chose Britain’s Glastonbury as site of the original Garden.<

David Rohl has studied the matter in great detail[230] and located the ‘Garden’ in northern Iranian province of East Azerbaijan near the city of Tabriz. Rohl’s reasoning is worthy of study and perhaps comparison with the views of Emilio Spedicato, who offers his reasoning for placing Eden in Pakistan’s Hunza Valley in two papers on the Internet(b)(y). Rohl was partly inspired by the work of Reginald A. Walker[1388/9]

The Sabbah brothers, Roger and Messod, controversially place Eden in Egypt[310] and offer a range of evidence to support this contention. Ralph Ellis has also opted for Egypt in his book, Eden in Egypt[0951] and claims that Adam and Eve were in reality Akhenaton and Nefertiti! Ellis also supports his theory with two online papers providing excerpts from his books(o)(p).

Further to the west is the Tunisian town of Oudna, which has been nominated as Eden by one Patrick Archer on his somewhat spartan website(d).

What may appear just as implausible to many is the claim by Felice Vinci[019], that the Eden story was imported from northern Europe, specifically from Finnish Lappland. Even more incredible is the assertion by the likes of William C. Chappell that the Garden of Eden was in fact situated in the United States. His Mormon inspired views are available as a free eBook(c) on the Internet.

According to his well illustrated website(f) Paulo Riven has located the Garden of Eden just north of the Ngorongoro Crater in Tanzania.

The Garden of Eden has been suggested by some as another name for Atlantis representing as it does a mythical time of peace and abundance. However, Eden is never spoken of in the terms of military might and commercial success attributed to Atlantis.  One of the better known proponents of this idea of an Atlantean Eden was the late Professor Arysio dos Santos(a) who was convinced that it was located in the South China Sea before the ending of the last Ice Age submerged large areas of Sundaland. Shortly before his death in 2005 he published[320] his theories, expanding on material that he had made available on the Internet for some years. Frank Joseph also claims[106][107] that the Garden of Eden was located on the lost island of ‘Lemuria’ located in the Pacific.

Currently. the sadly benighted Iraq is trying to lure tourists to holidays in ‘the Garden of Eden’(m)!