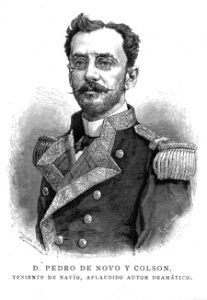 Pedro de Novo y Colson (1846-1931) was a Spanish naval officer, who was strongly influenced by the Atlantis theories of Paul Gaffarel and while offering nothing new he also situated Plato’s island in the Atlantic with the archipelagos there as its remnants.

His views were published in Ultima Teoria Sobre La Atlántida [1674].