The Red Sea, also known as the Erythraean Sea lies between Egypt and Sudan in Africa and Saudi Arabia and Yemen in Asia. 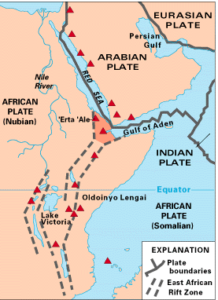 At the southern end lies the strait of Bab-el-Mandeb, considered by a few researchers as the location of the Pillars of Herakles.

The ‘Red’ is often attributed to the seasonal blooming of a red-coloured bacterium. Some academics think that the cardinal points were ascribed colours, ‘red’ being south! Emilio Spedicato, in his paper(a) on the location of the biblical Ophir, points out that pumice which is normal volcanic ejecta turns blood-red when mixed with seawater. Immediately to the south is the East Africa Rift, home to dozens of volcanoes, which when erupting may have had pumice dust blown towards the Red Sea!

*[Coincidentally, the presumed cradle of humanity is situated not too far from the Rift volcanoes and has drawn serious claims(b) that they may have had a part to play in the evolution of hominids!]*