Karl Jürgen Hepke was born in 1933 and is a graduate engineer. For over twenty years he has been researching early history. He is the author, in German, of The History of Atlantis[381] with an English translation online(f).

Hepke maintains two websites(a)(b) that have a good portion of their content in English and cover a range of Atlantis related subjects. However, in an overview(d) of his work, he moves into the area of UFO’s and alien intervention, which for me is a ‘turn off’.

Hepke follows the opinion of Lewis Spence who was probably the earliest to postulate the idea of ‘two Atlantises‘. The first located in the North Atlantic and was flooded by rising sea levels following an impact with a comet or asteroid. He believes that this impact was responsible for some axial displacement of the earth. The second was the Atlantis described by Platoand in the opinion of Hepke was centred in Tartessos, the Tarshish of the Bible, in Andalusia, Spain. He specifies the present Puerto de Santa Maria(e), immediately north of Cadiz, as the site of Tarshish, where recent excavation, have revealed Phoenician remains and a very ancient racecourse.

Hepke agrees with the idea that Plato’s 9,000 ‘years’ were in fact lunar cycles and should be accepted as 692 solar years, which when added to the date of Solon’s visit to Sais would give a date of 1192 BC for the demise of Atlantis. Hepke points out that current understanding indicates a date of 1250 BC for the catastrophic impact that led to the destruction of Atlantis and that 1190 BC was the date of the first battle between the Egyptians and the Sea Peoples. However any slight date discrepancies could be explained by the fact that the 9,000 ‘years’ referred to is highly unlikely to have been intended as exact. In the same way that people of today will casually speak of an event in the 18th century as having occurred ‘a couple of hundred’ years ago, with an accepted accuracy that could be 50 years out. 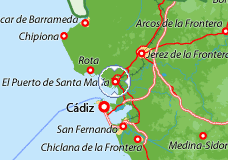 What is strange is that if Hepke is equating the Sea Peoples with the Atlanteans, this conflicts with Plato’s story, which suggests that the Egyptians did not have to fight the Atlanteans, who were engaged in warring with the Athenians diverting their forces away from Egypt.

Hepke delivered a paper(c) to the 2011 Atlantis Conference on Santorini. He outlined his Atlantis theory locating it on the plain of the River Guadalete which runs into the Bay of Cádiz near Puerto de Santa Maria.

Hepke has also added some links to video clips to his websites.