Santiago Genovés Tarazaga (1923-2013) was a Spanish anthropologist with a great interest in pre-Columbian Mexico. 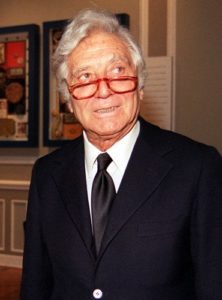 He was part of the Ra I and Ra II expeditions led by Thor Heyerdahl that crossed the Atlantic in a reed boat at the second attempt. He has written many books and essays on scientific subjects as well as a number of papers of literary criticism. But is probably best known for a joint paper with Romeo Hristov published in 2000 in Ancient Mesoamerica(a)  in which they identified a terracotta figurine discovered in 1933 in Mexico as clearly Roman adding to the ever growing body of evidence for probable pre-Columbian trans-Atlantic contacts. The existence of such early oceanic travel is fundamental to a number of Atlantis related theories, particularly those that promote Egypt as a colony of a  MesoAmerican Atlantis or where a mid-Atlantic Atlantis is claimed to have provided a stepping-stone between the Old and New Worlds.