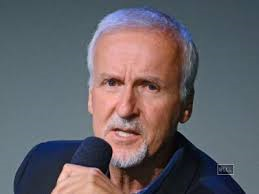 Paolo Macoratti is an Italian architect who is quoted by Sergio Frau, in his highly publicised book, as identifying sites in southern Sardinia as the locations of the plain and city of Atlantis. 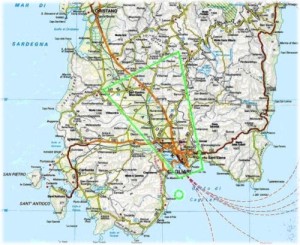 Macoratti’s map shoes the Plain of Atlantis as a green quadrangle with the green circle to the south in the Gulf of Cagliari as his preferred site for the city of Atlantis.

The link below has maps displaying both views. 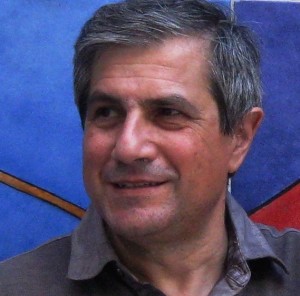 UNESCO was the surprising sponsor of a two-week exhibition(a) in Paris, in 2005, based on the work of Sergio Frau, which placed Atlantis in Sardinia.

Emanuela Katia Pilloni, an archaeologist, has written an article(a) , in Italian, supporting the idea that the identification of Sardinia with Atlantis should be reviewed. Dr. Pilloni supports Sergio Frau in locating the Pillars of Heracles at the Strait of Sicily. A copy of the original as well as a poor English machine- translation is available(b).

Giuseppe ‘Peppe’ Corongiu (1965- ) is a journalist, writer and a supporter of Sergio Frau’s theory that Atlantis had been located on Corongiu’s native Sardinia.

Italian Atlantology can be traced back to the 16th century when Fracastoro, Garimberto and Ramusio, identified the Americas as Atlantis. In fact we should look to the 15th century when Ficino was the first to translate Plato’s entire works into Latin giving medieval Europe its first access to the complete Atlantis texts. Not much happened until 1788 when Carli attributed the destruction of Atlantis to a close encounter with a comet. In 1840, Angelo Mazzoldi proposed Italy as the location of  Atlantis and as the hyper-diffusionist mother culture of the great civilisations of the Eastern Mediterranean region. He was followed by others such as Giuseppe Brex(b).

Two years after Donnelly published his Atlantis in 1882  the Italian, D’Albertis followed him and opted for the Azores as the remains of Atlantis.

Not much developed in pre-war Italy apart from Russo’s journal which ran from 1930 until 1932. After the war other Atlantis journals was established by Gianni Belli in 1956 and Bettini in 1963. After that there was a wide range of theories advanced by Italian researchers. Spedicato located Atlantis in Hispaniola, Stecchini opted for São Tomé, Barbiero, who although Croatian by birth was an admiral in the Italian Navy nominated the Antarctic as the home of Atlantis before the Flem-Aths published their Antarctic ideas. Bulloni chose the Arctic, Pincherle identified the Mandaeans as the last of the Atlanteans and Monte links Thera with Tarshish.

In recent years the most widely reported Atlantis theory to emanate from Italy came from Sergio Frau who advocates Sardinia as the original Atlantis. However, this idea is not new having been promoted by Poddighe in 1982. Frau has subsequently been supported by other commentators such as Tozzi and Novo. I cannot help feeling that there might be a trace of nationalism underlying this theory, a suspicion that I have held regarding writers of other nationalities.

The latter end of the 20th century saw the development of the Internet which enabled the instant promotion of Atlantis theories, both silly and serious, to a global audience. Italy was no exception, where websites, such as Edicolaweb that are sympathetic to the exploration of historical mysteries emerged(a).

More recently, Marin, Minella & Schievenin had The Three Ages of Atlantis[0972] published in 2014. This is an English translation of their original 2010 work. In it they suggest that Atlantis had originally existed in Antarctica and after its destruction survivors established two other Atlantises in South America and the Mediterranean. Perhaps more credible is the theory of Capuchin friar, Antonio Moro who, in 2013, suggested that Atlantis had included Iberia, the south coast of France and the west coast of Italy![0974]

Diego Silvio Novo is an Italian researcher who has joined the ‘Atlantis in Sardinia ’ club(a)(b). He follows the work of Sergio Frau in placing the ‘Pillars of Heracles’ at Strait of Sicily, which he claims was much narrower at the time of Atlantis.

The first link below tells of Novo’s support for Frau but also ends with an angry response from Rosario Vieni, who claims that he had proposed the Strait of Messina as the location of the Pillars of Heracles before Sergio Frau and that his (Vieni’s) work had been plagiarised! 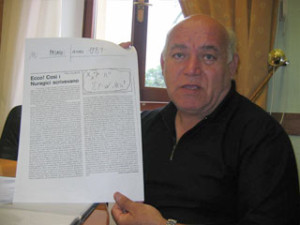 Paolo Valente Poddighe is an Italian researcher who claims to have been the first to have identified Sardinia (along with Corsica) as the location of Atlantis as early as 1982. This was long before Robert Ishoy proposed the same on his website(a) and two decades  before Sergio Frau published his 2002 book with an identical claim. This led to accusations of plagiarism by Poddighe, who only then published his own book, Atlantide Sardegna:Isola dei Faraoni[0711] (Atlantis Sardinia: Island of the Pharaohs).

Where Frau locates the Pillars of Heracles at the Strait of Sicily, Poddighe opted for the Strait of Bonifacio between Sardinia and Corsica,*[which would imply that the islands of Atlantis ‘beyond the Pillars’ would have to be the Balearic Islands, which offer few features to match Plato’s description of Atlantis.]*Consequently, I am personally inclined towards siting them further east at the Strait of Messina.