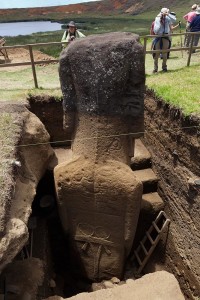 Another Easter Island mystery(i) is its ‘rongorongo’ script, which like the Phaistos Disk has produced quite a number of ‘claims’ of successful decipherment(c)(d). Similarities between rongorongo and symbols carved on the Ingá Stone in Brazil have also been noted(v).

A recent study has added some confusion to conventional assumptions regarding early warfare on the island, claiming that there is now evidence that “Easter Island society did not collapse prior to European contact and its people continued to build its iconic moai statues for much longer than previously believed, according to a team of American researchers” Their conclusions were published in the February, 2020 issue of the Journal of Archaeological Science.(y)