Theodoros V. Paschos is a Greek researcher and the son of Vassilios Paschos (1924-1993) who was also an atlantologist. Theodoros delivered a paper to the 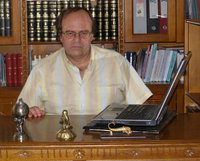 2008 Atlantis Conference in which he placed Atlantis in the Atlantic and focused on its destruction which he claims to have taken place in two stages. The first of these was a partial submergence around 9600 BC resulting from the melting of the Ice Age glaciers. The second and final destruction took place, between 7000 BC and 7500 BC, as a consequence of the seismic instability of the Mid-Atlantic Ridge which generated earthquakes and tsunamis.

Paschos formerly supported his work with a website, now closed, which had included some English sections.