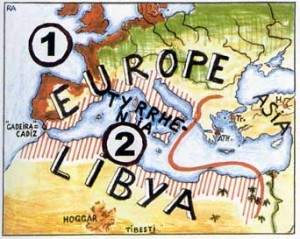 published a book[688] which claimed that Atlantis had been a federation of the megalithic peoples of Western Europe. Following the lead of Jürgen Spanuth he locates a capital of this ‘empire’ in the vicinity of Helgoland with a second power centre in North Africa. My principal argument against this is that there is no evidence of writing being used by the megalithic cultures, an ability clearly attributed to the Atlanteans by Plato.

Rathjen’s 526-page book has had enthusiastic reviews, but unfortunately, it is only available in German at present.

His views are also available in an 2005 article on the EFODON website(a).