Thalassocracy is a term frequently applied to Atlantis as many readers will know. At its simplest it is applied to nations whose wealth is derived from naval supremacy. Other early thalassocracies were the Minoans and the Phoenicians. 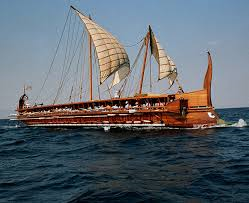 Plato describes the busy shipyards full of triremes and their equipment (Critias 117d). While the use of the word ‘triremes’ may be an anachronism it was probably introduced as the easiest way to impress his audience. However, triremes were warships but Critias 117e refers to the commercial harbour which “was filled with ships and merchants from all quarters”. All this would seem to indicate an important trading nation backed by powerful naval support.

Some commentators have highlighted on the apparent conflict between Critias 117 with its description of a naval power and Critias 113e which relates that “at that time neither ships nor sailing were as yet in existence”. However, the context makes it quite clear that the 113e refers to the time of the foundation of Atlantis which may have been during the Late Stone Age, while 117 refers to the Bronze Age.