Charles R. Kos is an Australian ancient mysteries researcher whose website(a) deals with a range of 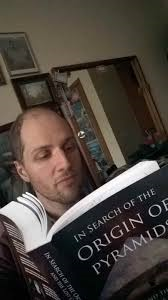 He has also produced a number of videos in support of his theories.

Inevitably, he included Atlantis in his output(b), which he claims was part of what we now know as Britain, but was specifically a sunken part of Britain, more generally called Doggerland today.

>In a 2019 paper, Kos put forward the claim that the ancient city of Old Sarum was the capital of Atlantis. It is near the cathedral city of Salisbury and not far from the megalithic monument of Stonehenge(a). I was not convinced.<

However, a reading of his homepage also offers some comedic entries, such as his belief “that Macchu(sic) Picchu in Peru which is held to be ‘Inca’ is in fact, I am fairly certain, an Irish Monastery from the Dark Ages.”

Much of what he has produced is highly speculative, which I am prepared to attribute to over-enthusiasm.